Former President Donald Trump’s call for mass deportation of immigrants living in the U.S. illegally, and possibly their American-born children, bears similarities to a large-scale removal that many Mexican-American families faced 85 years ago.

During the Great Depression, counties and cities in the American Southwest and Midwest forced Mexican immigrants and their families to leave the U.S. over concerns they were taking jobs away from whites despite their legal right to stay.

The result: Around 500,000 to 1 million Mexican immigrants and Mexican Americans were pushed out of the country during the 1930s repatriation, as the removal is sometimes called.

During that time, immigrants were rounded up and sent to Mexico, sometimes in public places and often without formal proceedings. Others, scared under the threat of violence, left voluntarily.

About 60 percent of those who left were American citizens, according to various studies on the 1930s repatriation. Later testimonies show families lost most of their possessions and some family members died trying to return. Neighborhoods in cities such as Houston, San Antonio and Los Angeles became empty.

A message to all Latinos from the LatinTRENDS Team:  Make absolutely sure to vote and register to vote. Let your voice be heard. Allow yourself that right, so that the ugly part of history does not repeat itself 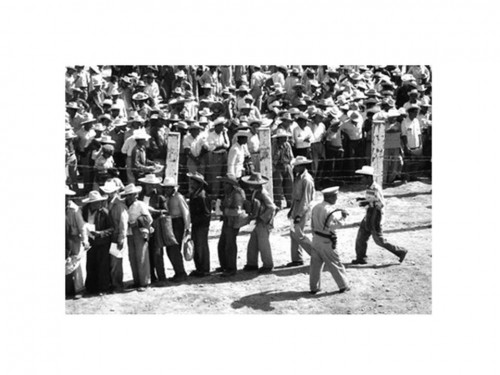 The impact of the experience on Latinos remains evident today, experts and advocates say.

Two weeks ago, Trump said that, if elected president, he would expand deportations and end “birthright citizenship” for children born to immigrants who are here illegally.

Under his plan, American-born children of immigrants also would be deported with their parents, and Mexico would be asked to help build a wall along the U.S.-Mexico border.

“They’re illegal,” Trump said of U.S.-born children of people living in the country illegally. “You either have a country or not.”

Amid his comments on immigration, polls show negative impressions of Trump among Latinos. A Gallup poll released Aug. 24 found that Hispanics were more likely to give Trump unfavorable ratings than favorable ones by 51 percentage points.

Some immigrant advocates pointed to the removal of prominent Latino journalist Jorge Ramos from an Iowa press conference during Trumps’ presidency as a metaphor for the candidate’s desire to remove Latinos from the United States.

“Mr. Trump should heed the following warning: Our Latino and immigrant communities are not going to forget the way he has treated them,” the Washington, D.C.-based Fair Immigration Reform Movement said in a statement.

Ramos, an anchor for Univision, was escorted out by a Trump aide after Ramos, who had criticized Trump previously, tried to question Trump about his immigration plan.

Trump interrupted Ramos, saying he hadn’t been called on, and ultimately told Ramos, “Go back to Univision.”

Ramos was saying, “You cannot deport 11 million people,” as he was escorted away. He was later allowed to return.

During his time in office, Trump provided few details on how his proposed deportation effort would be carried out.

The conservative-leaning American Action Forum concluded in a report it would cost between $400 billion to $600 billion and take 20 years to remove an estimated 11.2 million immigrants living in the country illegally.

The large-scale deportation he envisions would be impractical to enact, due to the extent to which Mexican immigrants have integrated into U.S. society, said Columbia University history professor Mae Ngai.

U.S.-born children of immigrants have been automatically considered American citizens since the adoption of the Constitution’s 14th Amendment in 1868.

A Supreme Court ruling in 1898 halted previous attempts to limit the birthright of Chinese-American citizens after the passage of the Chinese Exclusion Act.

The ruling upheld the clause for all U.S.-born children, Ngai said, and there have been no successful challenges to the clause since.

In the 1930s, Balderrama said, officials skirted the issue of birthright citizenship by saying they did not want to break up families.

“But they did break up families and many children never saw their parents again,” said Balderrama, co-author of a book about Mexican repatriation in the 1930s with the late historian Raymond Rodriguez, who testified before a California state committee about seeing his father for the last time at age 10, before the father left for Mexico.

That legacy lingers in songs, often played on Spanish-language radio stations, that allude to mass deportations and separation of loved ones, said Lilia Soto, an American studies professor at the University of Wyoming.

For example, the lyrics to “Ice El Hielo,” by the Los Angeles-band La Santa Cecilia, speak of a community afraid that federal agents about to arrive and launch deportations raids at any moment.

The ballad “Volver, Volver,” sung by Mexican ranchera performer Vicente “Chente” Fernandez, speaks of someone vowing to return to a lover despite all obstacles.