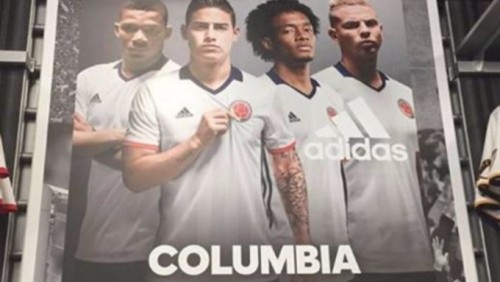 At least the Colombian National team can live up to it’s lofty credentials. The Copa America entrant started off well with two victories in group play to start off the tournament. They are one of the favorites to win and James Rodriguez is poised to add to the worldwide fame he first achieved at the 2014 World Cup.

Only one problem. In the advertisements concerning Columbia Pictures, no, I mean the space shuttle, Columbia, check that, the Columbian National Soccer team, it appears that Adidas‘ advertisement agency goofed on the basics, spelling.

The error caused the ads, that were to show off the players white home jerseys, to be removed and Adidas to be ridiculed. The company spoke about how much they valued the partnership.

“We apologize for our mistake,”

“We removed these graphics and are quickly installing new versions today.”

This slight has seemed to only add to Colombian play as they followed their 2-0 win over the United States with a 2-1 victory over Paraguay Tuesday night at the Rose Bowl in Pasadena, California.

U.S “HANDS” OVER OPENER TO COLOMBIA IN 100TH COPA AMERICA OPENER
Bronx’s Lehman College has a new President!
Translate »
%d bloggers like this: