American Businesses Have An Eye On Cuba

American Businesses Have An Eye On Cuba 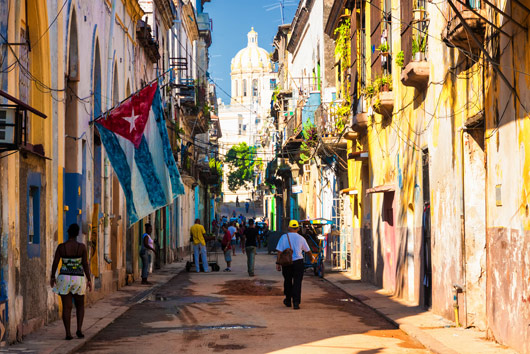 I don’t know if Nike is planning to set up stores in Cuba like it has in Paris but many American companies are salivating over the thawing of the United States and Cuba relations, especially now that the White House announced that the U.S. will take Cuba off the list of state sponsors of terrorism.

And even though republican presidential candidate Marco Rubio thinks it’s a bad idea to take his parent’s native land, Cuba, off the list, President Obama said to congress that the Cuban government “has not provided any support for international terrorism” over the last six months. He also said that Cuba “has provided assurances that it will not support acts of international terrorism in the future.”

What does being off the list mean to Cuba? Well, it means that banks are no longer scared of doing business, which has impaired the communist island from conducting international commercial business. Before, but not any more because Cuba is finally off the list, non-U.S. banks that gave credit, transfer funds or helped with financial transactions were susceptible to being sued in U.S. courts.

But now we are going to see many private businesses and corporations drooling over the unsoiled land, authentic real estate and grinning over the prime economic opportunities that Cuba presents.

Recently, Facebook CEO Mark Zuckerberg said in a summit in Panama City that he would consider expanding into Cuba if the communist country continues to open up policies to operate an accessible Internet.

Even though there are some restricted flights to the beautiful island of Cuba – American Airlines along with Delta, Jet Blue, Southwest and U.S. Airlines have all expressed interest in routing regularly scheduled direct flights to Cuba.

“American [Airlines] continues to monitor changes to the Cuba travel policy,” said spokeswoman Martha Pantin to online newspaper philly.com. “When legally allowed to do so, we will offer our customers scheduled service to Havana and other destinations.”

CheapAir.com just announced that you could now click direct flights to Cuba with just a tap of the mouse. “The only thing different is that we are making flights available online. It’s just like booking a flight anywhere else,” said CheapAir.com CEO Jeff Klee. “But it’s still not legal for just anyone to fly to Cuba, so we have to have those booking flights check one of the 12 categories for travelers. Other than that, it’s no different from booking a flight to Las Vegas.”

Comunilife and its Teen Suicide Programs now Available in Queens
“CRONICA DE CASTAS” COMING TO THE U.S.
Translate »
%d bloggers like this: