In celebration of Hispanic Heritage Month Andrea Arroyo will be exhibiting “Presencia” at the historical site of the first Women’s Rights Convention, held in 1848, in Seneca Falls, NY. 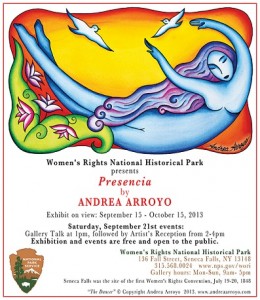 “Presencia” features twenty artworks that celebrate women’s strength and honor the female body. While commemorating the stories of extraordinary historical figures, the artist also celebrates the role of women in contemporary society and brings attention to issues of gender justice.

Works in the exhibit include “The Dancer – Homage to Gabriela Mistral (Chile 1889-1957 ),” featured in the invitation card, “Eliza’s Garden – Homage to Eliza Jumel (US, 1775-1865,)” and “Blue Mayahuel – Aztec Goddess of Agave,” all works inspired by powerful female characters from a variety of world cultures.

Andrea Arroyo is an award-winning artist with an extensive trajectory. Her artwork is exhibited, published, reviewed and collected internationally.

Ms. Arroyo’s numerous honors include: Global Citizen Award Artist selected by President Bill Clinton; 21 Leaders for the 21st Century; Groundbreaking Latina in the Arts; Official Artist of the Latin Grammys; Outstanding Latina of the Year; Woman of the Week, Women in the World Foundation; and the New York City Council Citation Award for Achievement in Art. She has received awards from the Northern Manhattan Arts Alliance, the Puffin Foundation and the Lower Manhattan Cultural Council, and Fellowships from the New York Foundation for the Arts. 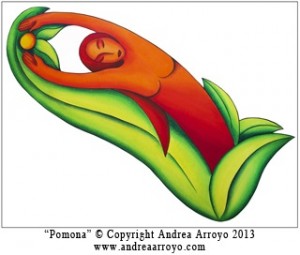 Ms. Arroyo’s work has been published extensively, including The New Yorker, The New York Times and The International Herald Tribune and has been the subject of over 150 features in the national and international media.