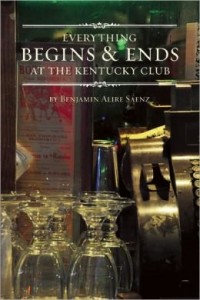 Getting published is hard enough and to win an award for your work may be something that takes years of rejection, editing, and proofing in order to perfect that piece of work. But hard work and dedication eventually pays off and your work begins to get notice by others outside of your own community.

All authors want to be famous at some point in their career and for Benjamin Alire Saenz, his hard work paid off by becoming the first Latino writer to win the PEN/Faulkner Fiction Prize 2013 for his book “Everything Begins and Ends at the Kentucky Club”. Saenz book is a collection of stories with multiple settings that either tell the story or the characters actually act them out. His stories revolve around the idea of comparing and contrasting ideas on both sides of each party.

The PEN/Faulkner Award is chosen by the foundation’s directors to serve as the judge for the prizes and pick the finalists for the award.