Bernie or Hillary? Who Could Win the Latino Vote?

Bernie or Hillary? Who Could Win the Latino Vote? 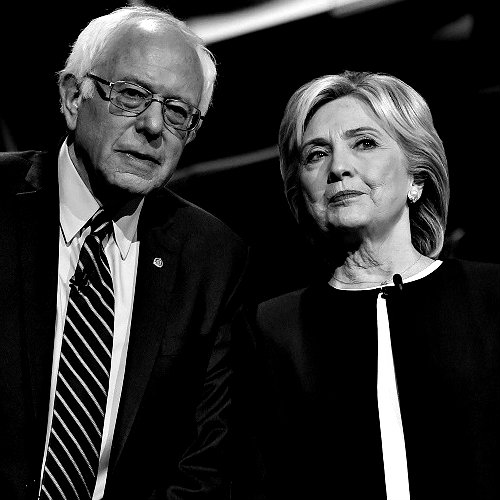 It’s been stated throughout numerous media platforms that when it comes to the 2016 Presidential Elections that Latinos could very well be the deciding factor to whom snags the 45th President Presidency. So with that being said whom among the top leading contenders could it be: Hilary Clinton & Bernie Sanders.

Yes, this week I will forego mentioning any of the Republican candidates because 1) they are quite tiring with their “crazy circus” debating…I’m sorry, that’s offensive to circuses who have done nothing wrong; 2) this post will look at the two Democratic contenders who are see-sawing the Latino vote.

When Vermont Senator Bernie Sanders threw his bid in to become our next president he was looked at as the underdog candidate amongst Latinos because very few knew his name and therefore new very little (apart from the fact that when it came time for Congress to vote, he voted against the comprehensive immigration reform placed before them).

But that was then and this is now.

Becoming somewhat of his own “celebrity” during this campaign season however, Sanders has become quite popular amongst a particular set of Latinos: millennials.

According to a recent report from the Pew Research Center, nearly half of all the Latino voters across this nation will be millennials since thousands more Latinos are turning 18 prior to November’s election and will become eligible to vote.

“Latinos will play a pivotal role in Sen. Sanders’ path to victory in important states like Arizona, Illinois, New York, California, and Florida, and we’re confident he can continue to win in battleground states with their help,” so stated Arturo Carmona, a deputy political director in Sanders’ campaign camp.

And this could be very true.

So far this could be very well true considering the one weakness Clinton has when it comes to the Latino community is generating enough excitement amongst young voters. Sanders is able to attain this by inspiring youth across America—Latino youth as well—to cast their vote for him by hitting what matters to them by promising: higher wages & free college.

With this being a large platform in his campaign, Sanders’ stance on immigration reform—now—could give him the necessary push to continue siphoning off a majority of Latino millennial votes if Clinton doesn’t act wisely.

“As president, I will fight for comprehensive immigration reform that provides a roadmap to citizenship for the 11 million aspiring Americans living in this country. But I will not wait for Congress to act. I will take executive action to accomplish what Congress has failed to do and build upon President Obama’s executive orders to unite families,” said Sanders, back in December 2015.

It’s Sanders “new” rhetoric that’s pulling in a large majority of his voter-supporters. He represents a change (not to be confused with President Obama’s change) that could be a great threat to Clinton if she doesn’t manage to sway the youth vote soon.

However, Sanders may still find the path to becoming the next President of the United States difficult due to Clinton having an ace in her pocket that Sanders does not yet have: a familiarity within political world.

During the recent Super Tuesday, Clinton displayed why she is a threat that should be taken serious despite what some may some. Yes, I do think she lacks the youth vote however she could very well turn that around and says, promises, or does something that could change the game between she and Sanders.

Unlike Sanders, Clinton recently showed just how much support she has within the Latino community. In Texas alone during Super Tuesday, Clinton snagged the state by 42 points with Latinos making up 32% of it.

“Tuesday’s results show that Hillary Clinton has overwhelming support from the Latino community. In Texas alone, more than 315,000 Latinos voted for Clinton, which far exceeds the total number of votes Sanders received in Colorado and Nevada combined and shows the excitement for Clinton in the Latino community,” said a campaign spokesperson, Xochitl Hinojosa. “Our campaign will continue to fight for every vote and invest in states where the Latino community is critical.”

With stars like Ricky Martin & America Ferrerra backing her up, Clinton is a contender against Sanders because in her political career she’s been a political figure that’s been there for the people—and by people, the Latino people. When running for Senator of New York, Clinton’s large support came from the Latino community who found Clinton to be similar to her husband, former-President Bill Clinton, only slightly more better considering her stance in social action.

However, what could hit Clinton with her current supporters could be her stance on immigration which has a rocky history.

Back in 2014, Clinton responded to the capturing of unaccompanied minors caught at the U.S. border by stating they needed to be deported to “send a message” to other Central American families.

Statements like this along with a lack of confirmation to immigration reform advocates who asked that she’ll enact comprehensive immigration reform within her first 100 days in office by responding she’ll introduce legislation within that time frame could hurt Clinton later on in the race.

All-in-all, there is some promise that Clinton will stick to what she is stating she will do in the campaign especially when it comes to immigration reform—which will appease many Latinos.

Overall, expect to see some see-sawing between Clinton and Sanders before the final decision is made regarding which candidate will snag the democratic nomination and prevent a disaster from occurring in the office come 2017.