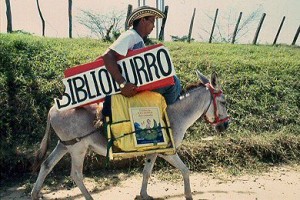 Luis Soriano is surely the most famous resident of La Gloria, a small town in a rural area of northern Colombia plagued by poverty, crime and armed insurrection. But Serrano’s fame has little to do with guns, drugs or politics. His reputation rests on the eight hooves of two sturdy donkeys named Alfa and Beto, his own two feet and his willingness to spend weekends tramping through rugged and dangerous backcountry. These are the components of a simple but brilliant idea — using donkeys to bring a circulating library of donated books to the children in some of Colombia’s poorest and most remote towns and villages.

Carlos Rendón Zipagauta’s new documentary, Biblioburro: The Donkey Library, tells the story of 39-year-old Soriano and his traveling library from the point of view of the man himself and, one might say, his two hardworking burros. The film rides along with Soriano on one of his arduous weekend rounds and discovers a world of dense tropical beauty, nearly impassible trails, dangers both natural (snakes, swollen streams) and human (guerillas, bandits), open-air classrooms and, most wonderfully, a thirst for reading and knowledge. But Biblioburro is also a portrait of Soriano — an unassuming, small-town elementary school teacher who not only had a great idea, but has been acting on it every weekend for over a decade.

Biblioburro: The Donkey Library has its national broadcast premiere on Tuesday, July 19, 2011 at

10 p.m. on PBS during the 24th season of POV (Point of View), which airs on Tuesdays through Sept. 27 and concludes with special broadcasts in 2011 and 2012. (Check local listings.) American television’s longest-running independent documentary series, POV has won a Special Emmy Award for Excellence in Television Documentary Filmmaking, an IDA Award for Best Continuing Series and the National Association of Latino Independent Producers’ 2011 Award for Corporate Commitment to Diversity.

Biblioburro provides a bracingly up-close sense of the determination and hard work required to saddle up each Saturday in the early morning darkness, and the sheer nerve and patience — not always expressed quietly by man or donkey — needed to brave Colombia’s poor and violence-torn hinterlands. Why would a man, and his family, persist in bearing such a burden? It soon becomes clear that Soriano is bringing more than books to the education-starved children of northern Colombia. He is bringing a gospel of education as the way the members of the next generation can transform their troubled country and their lives.

In some of the film’s most affecting scenes, Soriano encourages the children who gather at his stopovers to tell stories and draw pictures describing their lives. One by one, horrific tales of paramilitary massacres, mutilations and other violent traumas emerge, and the children depict the sadness and fear that shadow their daily existence. But Soriano does not shy away from these harsh realities. After the stories have been told, and their emotional impact on the children recognized, Soriano tells them, “Now, let’s put it behind us. We have to live in the present and show that Colombians are good people. Colombia must change.” This is the mantra Soriano spreads from village to village in his one-man quest to rescue his country by rescuing some of its poorest children.

Soriano’s faith in education comes from his own experience growing up amid the poverty and violence of the area, which he talks about at length. He is not an outsider, and one of the delights of Biblioburro is seeing Soriano in action. Whether he is reading to the children, instructing and scolding them on the care of books, talking to their uneducated parents about the importance of learning or showing up like the cavalry to buttress the morale of an earnest village teacher holding adult reading classes under a tree, his love for the people of his country is palpable. Many of the kids come long distances to greet Soriano, and their excitement when they spot the two donkeys bearing signs with the word “Biblioburro” written in blue is contagious.

Soriano started his donkey library with just 70 books from his own collection. As word of his unique effort spread, book donations rolled in. A decade later he has 4,800 books piled to the ceilings of the little house (and a half-finished library being built with donated funds) that he shares with his wife, Diana, and three children in La Gloria. The work of soliciting, cataloguing and storing the donated books, with the help of Diana and the children, is only the beginning of the complications Soriano’s simple idea has wrought. The project strains the finances of a family that lives on a teacher’s salary of $350 a month; Diana has opened a small restaurant to help make ends meet. Finally, of course, everything depends upon the singular drive of Soriano, who teaches all week, to set off into the rugged marshlands and forested hills surrounding La Gloria — something he does with astounding tenacity week after week.

Biblioburro is the story of a simple idea, a determined individual and a profound message. A project that virtually everyone involved “thought was crazy” at its beginnings has now become an institution. It has also become the inspiration for similar efforts in other parts of the world where rural poverty keeps children from books and from education.

“I met Luis Soriano when the town of Magdalena paid tribute to him,” says director Zipagauta. “When the ceremony was over, I approached him and asked about his work. Luis began telling me about the genesis of his ‘biblioburro,’ and as he talked passionately, I began seeing the story in images. In other countries, this would be fiction, but in my country, it is a reality. I thought this would be a magnificent story to tell, for what it says about human goodness and inventiveness and for what it reveals about the dignity of the Colombian people, especially the poorest among them.”