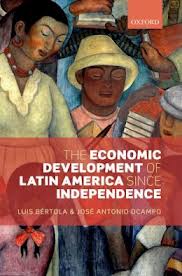 Economics may not be the most interesting thing to talk about on an everyday basis for some people, but to have an author that studied and knows a lot about it, is something different. Author, José Antonio Ocampo, presented his book, The Economic Development of Latin America since Independence on March 14th, 2013 at the American Society/Council of Americas.

Ocampo’s book is about economic reforms in Cuba and looks at the history of the economic development since it has gained its independence. He was very knowledgeable about the book and took the time to state facts about each participating country on how they played a part in Cuba’s independence. Several topics that were included in the discussion were income distribution, human development, equality, labor unions, gross domestic product, and social and economic convergence. The book furthers looks at strengths and weaknesses, services, imports, exports, and other countries that had helped for Cuba’s independence.

Ocampo was able to explain the book in a way that was interesting, insightful and informative. The audience was engaged and seemed to be more informed about the economic development of Cuba after the discussion. After the discussion, there was opportunity for question and answers as well as Ocampo signing his book and talking with the guests.