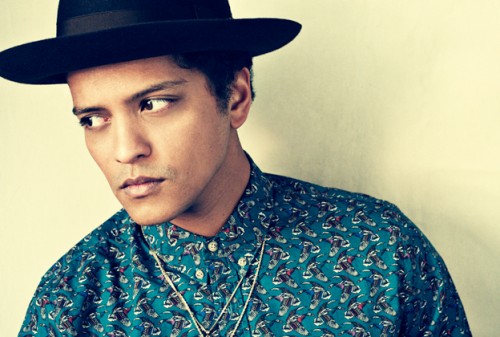 He came out like an F-16 flying over your backyard. The artist known as Bruno Mars is taking it personal when it is suggested by anyone that he changed his last name because he doesn’t want to be associated with the Puerto Rican aspect of his shared heritage.

Though it is understood that most celebrities revert to stage names to better promote themselves and yes at times to Americanize themselves if their original name is considered too ethnic. For example Martin Sheen over Estevez or Rita Hayworth over Cansino. But Bruno was quick to defend his name change from his original one of Peter Hernandez.

“I never once said I changed my last name to hide the fact that I’m Puerto Rican,” Bruno said, “My dad nicknamed me Bruno since I was two years old. Mars just kind of came joking around because that sounds bigger than life.”

Mars credited his father Pedrito, a musician himself, with teaching Mars the bongos as a youth. He patterned his old-school style after the fashion of that era with the pompadour and patent-leather shoes.

But Mars seems to be more concerned with being categorized in the music business as writing for one group as opposed to the general public who recognizes him as one of the finest artists today. Bruno will come to learn it’s best to let his music do the talking.

4th of July in NYC! Places in the City Where You Can View the Fireworks
Remembering The Artist Known As Prince
Translate »
%d bloggers like this: