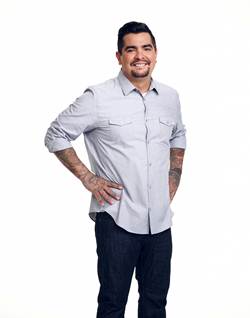 A James Beard Award-winning chef, Sánchez is chef/owner of Mexican restaurant Johnny Sánchez, with locations in New Orleans and Baltimore. He co-starred on “Chopped” and “Chopped Junior,” and is the author of two cookbooks – “Simple Food, Big Flavor: Unforgettable Mexican-Inspired Recipes from My Kitchen to Yours” and “La Comida del Barrio.” An active philanthropist, Sánchez launched his own charity, the Aarón Sánchez Scholarship Fund, empowering aspiring chefs from the Latin community to attend culinary school. An avid tattoo lover, he also is a partner in the world-famous ink shop “Daredevil Tattoo” in New York City.

Sánchez was a guest judge on Season Seven of MASTERCHEF and also will be featured in upcoming episodes of MASTERCHEF JUNIOR Season Five, airing Thursdays (8:00-9:00 PM ET/PT) on FOX.