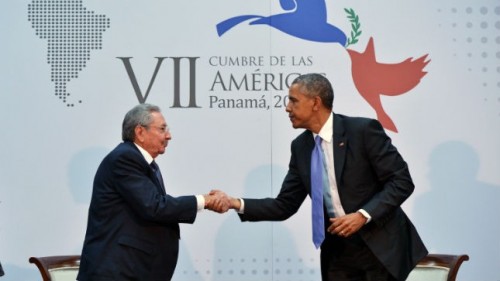 Last week, President Barack Obama announced that he would ask that Cuba be taken off of the United States Department’s list of state sponsors of terrorism in what can be another step to bettering the diplomatic relationship between the two countries. And while there are some who support it, well you won’t be surprised there are some who do not.

And there are two people who you should know does not support the new relationship between the U.S. and Cuba.

After five decades of giving one another the cold shoulder, President Obama and Cuba’s President Raul Castro have been mending that decades long estrangement. In an effort to continue that, President Obama has requested that Cuba be removed from a list that entails countries that supports terrorism and places restrictions upon the designated country that involves foreign aid and defense support among other things.

Cuba was placed on the list back in 1982 when it was found that the country was alleged to be providing provisions and acting as a safe haven to Basque separatists and members of the Revolutionary Armed Forces of Colombia which is also known as FARC.

But in recent reports, the U.S. Department has acknowledged that Cuba has been brokering peace talks between the Colombians rebels and the government while its ties and support of seems to be dwindling.

So, seeing that Cuba is changing and wanting to find a common ground it makes sense for President Obama to go before Congress and the country itself and acknowledge Cuba should be removed.

Although President Obama doesn’t face any true issues that may block his proposal, simply a 45-day review of Cuba in-which opposing lawmakers could try and block the removal, the erasing of Cuba from this list could go through with little opposition.

The other countries still on the terrorism list are Iran, Syria and Sudan and unlike Cuba the former three seem to be acceptable amongst opponents of the president than Cuba itself.

However, that doesn’t stop several key political figures who find the decision of coming to peace with Cuba an issue.

According to Presidential-hopefuls Senator Ted Cruz of Texas and Senator Marco Rubio of Florida, President Obama’s decision to remove Cuba from the list of sponsors of terrorism is an apparent great offense.

“I think it sends a chilling message to our enemies abroad that this White House is no longer serious about calling terrorism by its proper name,” said Rubio, the son of Cuban immigrants, in-response to the President’s decision, he also said it was a “terrible” decision on President Obama’s part.

Meanwhile, Senator Cruz has said that “Cuba must prove it is willing to change its behavior before the United States takes a single action to remove it from the list of state sponsors of terror.”

Now, Cuba has shown some significant changes in their behavior considering the country in nearly 50 years decided to talk to an active President of the United States and is leaning towards opening its country to our own. So, the Republican hopefuls responses to the president’s decision seems to be a spur of the moment one without truly thinking what it means.

But not every Republican is coming out against Cuba being removed from the list.

“It’s long past time to remove Cuba from the terrorism list,” said Senator Jeff Flake (R) of Arizona, “The list should mean something, and it means more now.”

Giving us hope that, much like there is hope the relationship between the U.S. and Cuba will improve, that there is some within the Republican party who know what is going on political as opposed to what is going on reactionary because someone they disagree with has opened their mouth.