Dany Garcia, powerhouse manager to the box-office heavyweight Dwayne “The Rock” Johnson and co-founder of their production company, 7 Bucks Productions, gave LatinTRENDS an exclusive look into her life as a business woman, producer, bodybuilder, philanthropist and mother.

The first-generation Cubana is keeping busy with 21 film projects and 10 television projects. I was curious to find out how Garcia manages to balance all these projects with her family life. In March, she tied the knot for the second time to strength and conditioning coach and business owner, Dave Rienzi (her first husband was Johnson) and is raising her teenage daughter Simone. “It comes from a commitment to do what makes me happy. It is much easier to be balanced when you start first with that commitment. Saying, ‘okay, where are the things that make my life happy and make me feel complete? And do I have those things in my life? Am I concentrating in that way?’ Because if you’re unhappy you can’t take the steps toward balance,” she explains.

Another key to success for the IFBB Pro champ was abandoning the conventional. Managing her ex-husband Dwayne Johnson was one of them. “What appeared as ‘this is the way you’re supposed to do it, it should look like this, you should spend this amount of time, and you should be here, you can’t do this, you cannot divorce your husband and then turn around and manage him and build a 1.6 billion dollar empire, you can’t do that,’ those things luckily I’ve always run away from. And the more I embraced looking and creating rules and processes that worked for me, that’s how I could do this.”

Garcia was born to very traditional Cuban immigrant parents and was raised in New Jersey along with her brother and sister. She shared a comical story about growing up when having to serve her father dinner after his shift at the auto body shop. He would tell his daughters they needed to learn to cook for their husbands. “I said ‘Dad, I’m going to be a millionaire. I don’t need to learn how to cook,” joked Garcia. Who would have known those words would stay true? “On the other hand, I have everything my family taught me which is indicative to my life. It was a blessing growing up being different. I have comfort that I come from a strong family background,” she added, “We grew up with great lessons and values learned – family first, discipline, tradition, music, language – all very powerful.”

And watching what my parents did and accomplished, really instilled going after the American Dream.

Eventually, Garcia left New Jersey to pursue her Bachelor’s Degree in International Marketing and Finance from the University of Miami School of Business. She began her career in the world of finance, and was a Vice President at Merrill Lynch Pierce Fenner & Smith, before founding her own private wealth management firm, JDM Partners LLC and most recently a talent and media management firm, The Garcia Companies. When discussing managing multi-talented star, “The Rock” I wondered how difficult it must have been after the divorce, especially since they knew each other since they were very young, “Even throughout personal problems, we were always locked in the business because we just had so much fun. It was so easy to talk about him and work in that space because the truth was, he was great. Whether
our marriage was working or not, he was fantastic. That was the easy part.” The difficult parts, as one would imagine, were working through communication issues as well as the disappointments and expectations that weren’t met.

With their focus and drive leading them to a billion dollar enterprise, Garcia shared some of their upcoming projects. “Wake Up Call,” premiering December 12, 2014 on TNT, follows the success of the TNT action reality show “The Hero” (2013). Garcia serves as an Executive Producer along with Dwayne Johnson, Ben Silverman, Chris Grant, Craig Armstrong, Rick Ringbakk, and Charles Wachter. The show is produced by Electus, 5×5 Media and 7 Bucks Productions.

The Rock will give everyday people a lending hand and empower those who are facing challenges in life. “I wanted to use our influence to make a difference and hopefully have the audience say ‘I can relate to that person, that situation’ and walk away while still being very entertained,” explains Garcia.

In addition, Garcia is working on other television projects such as the Peter Berg-directed “Ballers,” a half-hour series on HBO which centers on a group of former and current football players and will star Dwayne Johnson (Spencer Strasmore), marking his first major foray into TV series acting. Garcia executive produces alongside Johnson, Mark Wahlberg, Steve Levinson, and Evan Reilly. Other projects in development include “Rock & a Hard Place,” where Johnson mentors local youths at a one-of-a-kind juvenile detention center in Miami / Dade county and Comeback Kids, (working title), that focuses on anti-bullying. A longtime dream of the athlete was to one day compete on the Olympia stage. 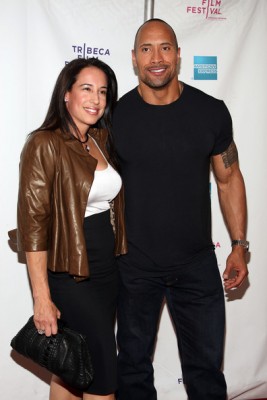 When the opportunity arrived and a new division opened up called Physique, Garcia was enamored. In her first competition she ranked seventh against 48 other competitors. In 2013, Garcia competed again earning a third place win. In the recent 2014 North American Championships, Garcia won first place as well as Overall in the Women’s
Physique Division to earn her IFBB Pro Card. She plans to compete at the Olympia in 2015.

Garcia has served as a trustee for both the University of Miami and FIU. She currently serves as Post-President of the UM Alumni Association and along with Johnson established The Rock Foundation. Garcia wanted to focus on something that would take a long-term investment impact for at-risk youth and in 2008 she founded The Beacon Experience, a foundation that works with at-risk children to empower them to break economic and social barriers and extend their education beyond high school. “We adopted 60 at-risk youth when they were in 2nd grade and my daughter was also in 2nd grade at the time. Now they’re in 8th grade. We have been providing educational support, emotional support, social education and exposing them to cultural opportunities so they can see and do more.” Their commitment to the foundation is to not get in trouble, not do drugs, do the right thing and graduate. When they graduate, The Beacon Experience pays for their tuition and board.

Our goal is to make a huge impact on kids who wouldn’t have this opportunity if not for the The Beacon Experience.

“It’s so, so rewarding to see when they were Simone’s age to where they are now. They’ll be gone in a few years and then we’ll get a second class,” expressed Garcia. “It’s a big part of why I do everything that I do.” It was an inspirational conversation that left me motivated and ready to take on the world. I’m sure it will be for those reading this article as well.

What You Can Learn from the Super Rich
Why We Desperately Need To Bring Back Vocational Training In Schools
Translate »
%d bloggers like this: