DAVID VILLA ENJOYING THE WINNING SIDE OF PLAYING IN NEW YORK.

DAVID VILLA ENJOYING THE WINNING SIDE OF PLAYING IN NEW YORK. 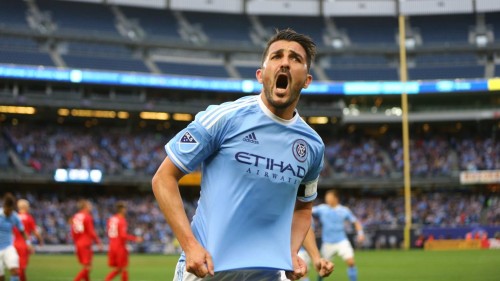 David Villa has won all the big tournaments, European Championship, FIFA World Cup, and two Confederation Cups with Spain and two UEFA Champions League titles at club level. But when Villa, 34, decided to play in MLS last year for expansion team New York City Football Club, it was expected to be a challenge.

Villa, who scored 18 goals, had little support until Andrea Pirlo arrived late. They failed to qualify for the playoffs and lost all their derbies to the New York Red Bulls, their more established rivals.

However, Villa learned the league, and now, with Frank Lampard healthy and scoring and Andrea Pirlo, a year wiser, Villa is leading the MLS in scoring with 13 goals in 21 games. Add to the mix a teenage sensation in Jack Harrison, and now NYCFC is a well-balanced team which lead the Eastern Conference with a 9-6-6 record (33 points) which places them third overall in MLS.

Now, Villa can see the light at the end of the tunnel as he was named to his second MLS All-Star Game. He’s not afraid to berate a teammate, even if that player is Lampard. He is growing into his role of captain and it looks like he is enjoying the ride the second time around.

Elena of Avalor: The Top 7 Things You Should Know
Only 18-23% of Hispanics may vote for Trump