Farruko, the chart-climbing urban music artist taking the reggaeton world by storm, is featured on the latest issue of LatinTRENDS Magazine. The Puerto Rican hit-music star discusses his latest project,  entitled “Visionary.” He talks about working with fellow reggaetonero J Balvin, fatherhood, the haters and the future of urban music. 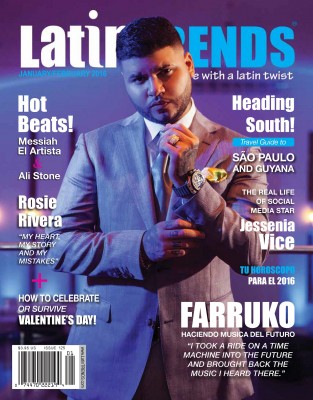 In her new book, “My Broken Pieces,” Rosie Rivera explores her painful past and shares untold secrets in hopes of helping victims of abuse. In this new interview, Rivera answers the intimate reason why she wrote the memoir. She even shares details about her relationship with her famed sister, Jenni Rivera and what it felt like after her death. Rivera also clarifies the current state of her relationship with her estranged brother Lupillo, and what she now thinks about her abuser, Jose Trinidad Marin “Trino,” husband of her sister Jenni.

Ratings are rising for Eva Longoria’s new NBC comedy “Telenovela.” In this issue, her co-star Jose Moreno Brooks talks about what it was like to work with Eva Longoria and his new film “”Mikael.”

Emerging musical talent Messiah El Artista joins the Dominican hip-hop movement and he talks to LatinTRENDS about his rising popularity in Latin America and in New York. Also in this issue, meet the world’s youngest film composer Ali Stone. This Colombian young lady developed the original motion picture soundtrack for the horror film “Demental” and earned the Nuestra Tierra award for “Best DJ of the Year.”

Head South this winter with travel guides to Brazil and Guyana. Learn how to survive Valentine’s Day depression and achieve fitness goals this year too.

In an interview, New York City Comptroller, Scott Stringer says Minority and Women Owned Enterprises received only 5.3% of the city’s 2015 procurement budget, and he explains how his new grading system can help reveal areas of opportunity for these business owners.

LatinTRENDS also offers roadmaps for excellence with, “Success in 2016,” “5 Career Makeover Moves,” and “What to Know Before Joining a Mastermind Group.”