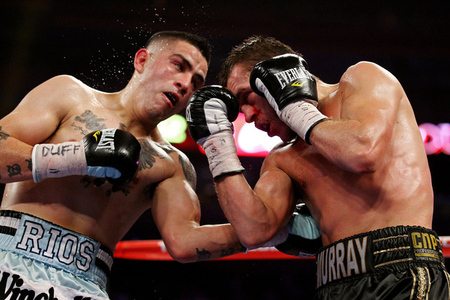 HBO’s hit late-night boxing franchise presents a double dose of all-out ring action when HBO BOXING AFTER DARK: NONITO DONAIRE VS. JEFFREY MATHEBULA AND BRANDON RIOS VS. MAURICIO HERRERA is seen SATURDAY, JULY 7 at 10:00 p.m. (live ET/tape-delayed PT), from The Home Depot Center in Carson, Cal., exclusively on HBO. The telecast will be presented in Spanish on HBO Latino.

In a junior featherweight unification title bout scheduled for 12 rounds, Nonito “The Filipino Flash” Donaire (28-1, 18 KOs) of San Leandro, Cal. takes on veteran scrapper Jeffrey “Marvelous Mongoose” Mathebula (26-3-2, 14 KOs) of Johannesburg, South Africa. Undefeated for more than a decade, and among the top pound-for-pound fighters, Donaire will be making his fourth appearance on HBO. In Feb. 2011, he scored perhaps his most memorable victory to date, delivering a second-round knockout of defending bantamweight champ Fernando Montiel that ended Montiel’s 25-bout winning streak and was named 2011’s knockout of the year. Known for his incredible quickness, Donaire is fresh off a split-decision victory over Wilfredo Vazquez, Jr. in February, when he captured a vacant 122-pound title.

Mathebula is coming off a tight victory over fellow countryman Takalani Ndlovu in March. Having won his last three bouts, he will be fighting outside his native South Africa for just the fourth time in his career.

The opening bout is a scheduled ten-round junior welterweight showdown featuring undefeated Brandon Rios (30-0-1, 22 KOs) of Oxnard, Cal. and Mauricio Herrera (18-2, 7 KOs) of Riverside, Cal. After struggling with his weight in recent bouts, as well as capturing a controversial split-decision victory over Richard Abril in April, the up-and-coming Rios is looking for redemption. Known as a bruiser, Herrera lost a hard-fought decision to undefeated Mike Alvarado in April, a bout many have called a candidate for fight of the year. Despite that loss, he has a history of upsets, besting then-unbeaten Ruslan Provodnikov in Jan. 2011, before defeating Mike Dallas, Jr. in June 2011.