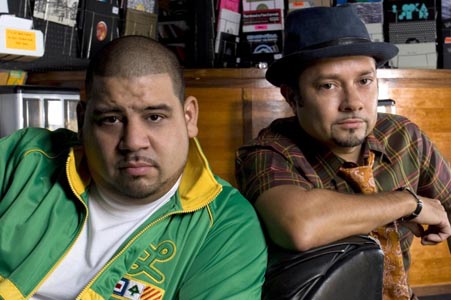 What do you get when you combine the styles of Kenny “Dope” Gonzalez and Little Louie Vega, the music production team of Masters at Work.

MAW, have reproduced tracks for various acts in the music industry. Some of the artists remixed by the two producers include Micheal Jackson, Janet Jackson, Madonna, Donna Summer, and Earth Wind & Fire. Thanks to the people of Red Bull Academy I got to sit down and talk to the creators of Nuyorican Soul.

Q:Were you in to Latin music when you were young?

Kenny “Dope” Gonzalez:
The crazy thing is I’m Puerto Rican so my father put me on to Latin music but I wanted to listen to the stuff the kids was listening to at the time which was hip-hop.
Little Louie Vega:
You know you have your mother and your father and they play that music loud at all the parties. The thing is that my uncle (Héctor Lavoe) he was a salsa singer and we heard all the music he made when he brought it home. We were kind of proud that we had an Uncle that was an incredible singer and doing incredible things.

Q:Do you think technology is helping or hurting the music?

Kenny “Dope” Gonzalez:
That’s a double edge sword because for people like us we embrace the technology. We use the technology to make it easy for us but at the same time we are abusing it. There guys that actually put the tracks in sync and the records are mixing by themselves. We are actually still mixing in like we play records. When we play we don’t know what we are going to do. Every night is live.

Little Louie Vega:
It’s another art that’s being created. Today’s technology is allowing a lot of people who don’t have access to go to a top-notch studio the chance to make music. You don’t need all that to create music. You never know when you’re going to find the next R. Kelly or the next D. Angelo. What Kenny was trying to say is that their doors that haven’t been open and we are looking forward to exploring it.

Kenny “Dope” Gonzalez:
The DJ was that dude but the emcee was the crowd rocker. Louie when he used to do his thing 15 or 10 years ago his emcee was a singer. Sometimes he would put a singer on the spot, put them in the booth and have them rock out live. He would put them on and watch them preform. However, the DJ is in fashion again, it is the “in” thing.

Little Louie Vega:
People in the mainstream have a better understanding of what a DJ does. When we were young our parents were like “you want to be a DJ when you get older, that’s not a real job.” But we believe in what we did and we went out there. We just helped it grow; we help inspire a lot of these people that are like rock stars today.

Q:Where do you prefer to preform, New York City or Overseas?

Little Louie Vega
Overseas the love is there for us it’s incredible. Oversea is where it all started for us. That is where we became a lot more popular then when we were here. Of course we played all the main cities here but it wasn’t until we went to the UK; they blew us up big. It was really Europe that embraced our music and embraced the Masters at Work sound.

Q:Which is the best collaboration you did?

Little Louie Vega:
We got to work with our hero’s. To be in the studio with George Benson it was like wow we were blown away. To be in the studio with Vince Montana and an entire salsa orchestra like there was about 31 people in the studio. There were strings, horns, and it was amazing. We had a lot of great experiences. Roy Ayers is here tonight! One of the reasons we wanted to bring Roy Ayers is cause Red Bull said “we want you to bring some of your artist or someone that you feel would like to present here in New York City” so we reached out to the once that live in New York City. We said hey lets check out if Roy Ayers is around and he happened to be here the same day. We have developed a lot of wonderful relationships with a lot of great artist and musicians, their life long relationships to me.

For more information on Louie Vega and Kenny Dope follow them on facebook at Masters At Work.