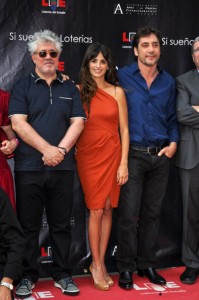 In an attempt to honor their greatest actors and actresses, Spain has created their very own “walk of fame”, very similar to that of the Walk of Fame in Hollywood, California. Properly called the “Calle de las Estrellas” – or Street of Stars – Spain has given 25 stars in order to celebrate their 25 years of their equivalent to our Academy.

Some notable stars to first receive their stars are highly noted couple, Penélope Cruz and her hubby Javier Bardem. Cruz has starred in movies such as Vanilla Sky and more recently the fourth installment to the Pirates of the Caribbean franchise. Bardem has been in noted movies like No Country for Old Men and Vicky Christina Barcelona. The newlyweds also shared the spotlight with actors such as Pedro Almodóvar and Antonio Banderas, who was not present for the ceremony.

Calle de las Estrellas settled on the sidewalk of the street of Martin de los Heros, in the Argüelles district, because the two major cinema complexes are homed there – the Renoir and the Golem – and a library dedicated to the seventh art.

Soccer Riots in Argentina
Is that right, Carlos Estevez?
Translate »