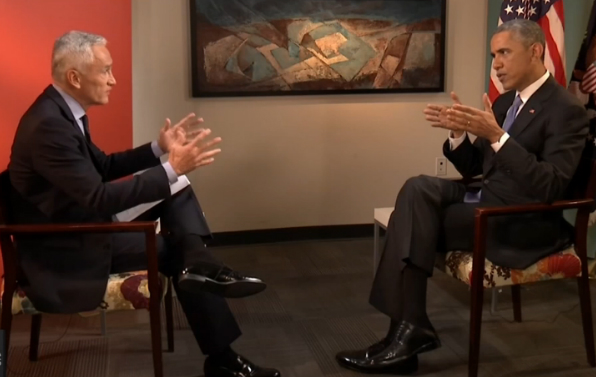 In a recent interview, Fusion’s Jorge Ramos disputed with President Obama on immigration and deportation while telling him that he is called the “deporter-in-chief’.

The Mexican-American host of “America with Jorge Ramos” questioned the president for previously saying that congress had tied his hands but now is taking presidential initiatives to change immigration policy to slow down deportation in the U.S.

Obama responded that he did not change his mind – as Ramos eluted to – but that he “reprioritized how we deploy the limited resources we have to focus on the borders [and] to focus on criminals.”

“One of the things that is important to understand is that although we are reprioritizing to make sure that we are not in the business of separating families, we are still sending a message to people who have not yet come here… [that] you are likely to be sent back,” said Obama, explaining that “reprioritizing” the focus on the borders and criminals (not really criminals, he means illegal immigrants that the government calls criminals for trespassing into the United States) is not him changing is mind but shifting the focus (wait! Isn’t that the same thing?).

“In the meantime the people who have lived here, lets make sure that they are treated as the members of our community that they truly are,” said Obama.

“If you, as you’re saying, always had the legal authority to stop deportations, then why did you deport 2 million people?” Ramos asked.

“For six years you did it,” Ramos stated while talking over Obama. “You destroyed many families. They called you deporter-in-chief,” Ramos said to Obama (oh snap).

President Obama responded quickly “You called me the deporter-in-chief”.

“It was actually Janet Murguia from La Raza,” said Ramos, who was referring to the president of the largest Latino advocacy group in the nation, the National Council of La Raza.

Obama’s record on immigration and deporting more immigrants than any president in history combined was the reason why Murguia said, “we consider him the deportation president, or the deporter-in-chief,” at the NCLR’s Capital Awards dinner earlier this year.

The president explained that there isn’t “simple quick answers to these problems,” and that “we spent that entire time trying to get a comprehensive immigration reform bill done that will solve the problems for all the people.”

“So right now,” Obama said, with “the actions that I’ve taken, I still have 5 million people who do not have the ability to get registered and be confident that they will not get deported.” Obama told Ramos to let the people “understand what their opportunities are” so they, the immigrants, can take the proper actions.