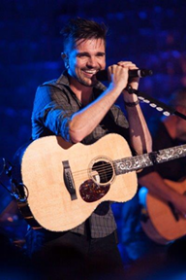 Award-winning singer-songwriter Juanes is the latest addition to the star-studded line-up of panelists confirmed to participate at the 25th annual Billboard Latin Music Conference Presented by State Farm® in Association with Pepsi on April 22nd at 3:00 pm. Juanes will participate in the “Billboard Digital Superstar Q&A with Juanes.” He will sit with Ingrid Otero, Executive Director of Programming of Terra Networks (USA) and Horacio Rodriguez, Senior Director, Digital Marketing of Universal Music Latin Entertainment US & Mexico, to share insights on the digital and global launch of his new album “Loco de Amor” with the “Terra Live Music in Concert” as his first on-stage performance to reach fans worldwide.

The Billboard Latin Music Conference, the longest-running and most prestigious event in the world dedicated to Latin music, will take place April 21-24, 2014, at the JW Marriott Marquis in Miami, FL. Registration information can be found at www.BillboardLatinConference.com and by following the event on: Facebook/Billboard and Twitter: @Billboard with the hashtag #BBLATIN.

With six solo albums to his credit and multi-platinum sales, Juanes is the world’s leading all-Spanish-language rock artist; he is a two-time GRAMMY and 19-time LATIN GRAMMY winner with nine No. 1s on the Billboard Latin Airplay chart. Hailed as “the first truly international rock star to emerge from Latin America” (AP) and “a soulful poet Latin America’s hottest singer-songwriter (NY Times), Juanes is also frequently recognized as one of the Spanish-speaking world’s leading social media voices with an online following of over 15 million fans.

The Colombian superstar’s dedication as a global activist also extends far beyond his passionate lyrics and is seen in his wide ranging charitable work for his own “Mi Sangre Foundation” and as a co-founder of the “Paz sin Fronteras” (Peace Without Borders) organization, which utilizes music to unite populaces regardless of political or geographic divides and advocates that all people are entitled to the basic human right of peace. Last month, Terra, a leading global digital media company, presented Latin music superstar Juanes on the first on-stage performance of his new album “Loco de Amor” (Crazy from Love) in a world-wide digitally-streamed “Terra Live Music” concert that took place in Miami, one day after his album’s release.

The Conference culminates with the Billboard Latin Music Awards Presented by State Farm, a three-hour multi-million dollar production that will broadcast live on Telemundo Thursday, April 24 at 8PM (7PM Central). The awards honor the biggest music stars based on Billboard’s weekly charts, and features performances by top artists across all genres of Latin music.

10 Signs You Have A Serious Case Of Wanderlust
Spanish Restaurants NYC: Arepera Guacuco
Translate »
%d bloggers like this: