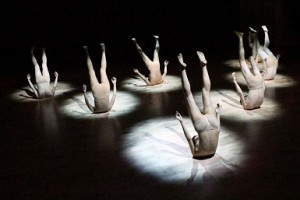 LEIMAY is thrilled to announce the world premiere of Becoming-Corpus at the Brooklyn Academy of Music (BAM). A performance experience of dance, real-time 6 channel video and live electronic music. Becoming-Corpus plays for 4 performances, September 12-15 at the Brooklyn Academy of Music’s newest venue, BAM Fisher (321 Ashland Place). The production marks the culmination of LEIMAY’s participation in the inaugural year of BAM’s Professional Development Program, a professional training program led in collaboration with the DeVos Institute of Arts Management at the Kennedy Center.

Meditative stillness, physical extremity, and an environment of 6 channel real-time video converge in a mesmerizing performance constructed by LEIMAY: Ximena Garnica & Shige Moriya, the duo behind CAVE, The New York Butoh Festival, and the Williamsburg SOAK festival. Becoming–Corpus stage production is a kinetic experience of altered time and space, tracing the relationships and transformations among beings, the individual, and society. Performance and design intersect to create a striking landscape where the body becomes an interface between what may be expressed and some other hidden realm of infinite potential that is ultimately inexpressible. Becoming-Corpus also encompasses a visual art installation in the BAM Fisher’s Peter Jay Sharp Lobby and a book related to the production. 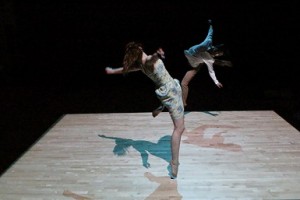 The visual art component of Becoming–Corpus features re-purposed historical fragments of earlier iterative processes as well as leftover detritus of the creative process. Photographed bodies are printed onto latex skins from previous works by Garnica and Moriya. The skins are beheaded, on display not far from sculptures of the dancers’ heads, maybe in souvenir to a whole body. Other objects included are molds of Garnica and Moriya’s whole bodies entangled in string, appearing to hover in the air but also to anchor one’s vision. They use tension and suspension to conflate a sense of expansion and collapse of space. The same sense of dislocated space echoes the derangement of order in the choreography of Becoming–Corpus. The exhibition runs concurrently with the Becoming–Corpus stage production, functioning as both an independent exhibition and a complementary component of the project. 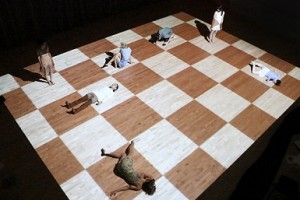