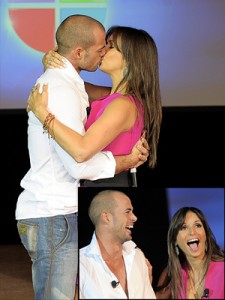 by: Chelsey Vergara
No, it’s not J.Lo, nor is it baby momma Elizabeth Gutierrez. It’s Giselle
Blondet who was seen locking lips with Cuban heartthrob William Levy. They
kissed during a special that was filmed Wednesday night on Univision
dedicated to the new season of the show “Mira Quién Baila”. Blondet was in
charge of a part of the presentation and unexpectedly received a kiss from
mister Levy. Neither of the stars has given much explanation as to why they
kissed but, don’t fret ladies, it’s not a budding romance. It was merely a
sort of “audition” for a possibility of working together as partners in a
novela in the future. Soon enough, the picture was uploaded to William
Levy’s fan club’s Twitter account.