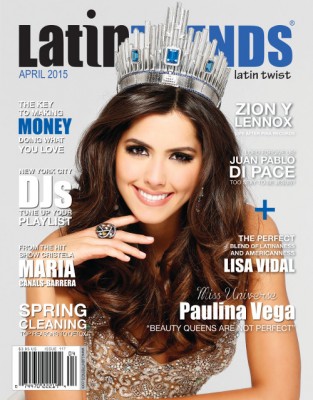 Miss Universe Paulina Vega, is on the cover of LatinTRENDS Magazine. She presently resides in New York City, and she tells LatinTRENDS all about her transition from her cushy lifestyle back in Colombia to owning her new role as Miss Universe.

This Colombian is not only beautiful, she is feisty and talented. She confesses what makes Colombians so beautiful and responds to her haters.

Pageant Trends
Beauty Pageants and Latinas go well together. Latin American beauty queens have been consistently crowned since the Miss Universe pageant began in 1952. In fact, over one-third of the total Miss Universe winners come from the region.

Venezuela is especially known for its seven titles, second only to the U.S. who has a total of eight. Puerto Rico follows close behind with five crowns while Mexico, Brazil and now Colombia each have two.

They are trending on television right now—see our interviews with Maria Canals-Barrera from the hit ABC show, “Cristela” and from BET’s “Being Mary Jane,” the stellar beauty Lisa Vidal. LatinTRENDS also talks to rising star, Raini Rodriguez from Disney’s “Austin & Ally” about her role in “Paul Blart: Mall Cop 2.”

In music news, just as music duo Zion and Lennox’ contract with Pina Records expired, Zion y Lennox sued Pina Record for $2.6 million citing financial discrepancies. Find out what they did next and how they manage to come out on top.

The April issue includes more on music including a special feature on the state of Latin music today plus interviews with New York’s top DJs for a playlist tune up.

LatinTRENDS’ very own publisher interviews the co-founder and CEO of MiTú, a multi-channel network on YouTube, which exclusively targets Latino audiences in English and Spanish. This is the first, of a series of interviews in which, he will interview, innovative entrepreneurs, men & woman that are pushing the envelope to move the community and America forward.

The April issue also features guides for “The Key to Doing What You Love,” “5 Career Habits to Incorporate Today” and money-saving tips.

What is multiple myeloma and what are the signs of this dangerous condition? More on this cancer plus a look back at Ryan White and the present state of AIDS in the Latino community.

The April issue also contains places to go and people to see in NYC, plus New Orleans travel and trending topics.