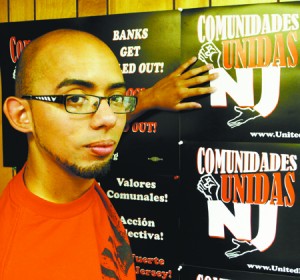 With the number of immigrants being detained and then deported today, many organizations are trying to combat the deportations and help immigrants who are facing them. For Christian Zamudio his life as a social organizer began when he fought to save his father from being deported, and now he fights for others who face the same.

Born in the United States of America, Zamudio’s parents emigrated from Zacatecas, a Mexican state, in 1980. When Zamudio was younger his father was arrested and brought to court in the town of Rochelle, Illinois on false charges.

After his father’s arrest, Zamudio began writing letters to politicians, collected money for bail, acquired a lawyer, solicited aide from neighbors all in an effort to get his father released. While his father remained in prison for three weeks and the legal proceedings lasted for two and half years before finally being cleared, Zamudio’s experience then prepped him as a social organizer.

After successfully helping his father, Zamudio joined MEChA, also known as Movimiento Estudiantil Chicano de Aztlán or Chicano Student Movement of Aztlán, which is “a student organization that promotes higher education, cultura, and historia…founded on the principles of self-determination for the liberation of our people…political involvement and education is the avenue for change in our society.”

Acting now as a social organizer in New Jersey, Zamudio works for Comunidades Unidas (United Communities) where he helps immigrants who are in the process of deportation by advising and defending them.

In-addition with working with Comunidades Unidas, Zamudio also collaborated on the project called Not One More Deportation, a project aiming to bring individuals and organizations together in a joint effort to expose, confront, and end unjust immigration laws.

This year at the State of La Raza’s conference—a conference held by National Council of La Raza—Zamudio spoke to attendees about the treatment he has seen regarding Chicanos living in America.

“In this part of the United States, including the New York metropolitan area, chicano issues aren’t talked about often because Mexican immigration is more recent,” said Zamudio. “But the children of Mexican immigrants who were born here are already asking, ‘Where am I from? Where am I going?’”

For his foreseeable future, Zamudio sees himself expanding outside of New Jersey and working beyond the national border to where he believes a part of the problem currently plaguing immigrants is coming from outside as well.

Until then, Zamudio will continue to work and aide those who are voiceless by giving them a voice and help keep immigrant families together.

New Project Launched to Help Detained Latino Children Immigrants
College, Everyone Should Have the Opportunity to Attend
Translate »
%d bloggers like this: