Hey! Want to grab a bite to eat at the original 2nd Avenue Deli in the East Village?

How about we grab some lunch at Manatus restaurant on Bleecker Street?

Then maybe grab something from Ralph’s Discount City up in TriBeca?

And why not stop by the great home of punk rock CBGB in the East Village, yeah?

Well, you kind of can’t anymore since these notable New York City landmarks are no longer around.

Considered local fixtures in the neighborhoods, familiar and popular mom-and-pop stores, diners, restaurants, and shops are slowly becoming extinct in the evolving city due to staggering rent hikes and a lackluster economy. Unable to withstand the hardship, many of these familiar shops are being replaced by big name corporations like Subway or Dunkin Donunts or banks like Chase and Capital One.

In their photo book Store Front – The Disappearing Face of New York, photographers James T. and Karla L. Murray take readers on a visual tour of some of the familiar and irreplaceable store fronts that line street after street of New York City.

Choosing places that “look like they’ve been around forever” the duo has in a way allowed such locales to exist forever in photographic form. Organized by borough and then subdivided into neighborhoods, the photographic book poses as an encyclopedia of sorts that manages to preserves the now extinct shops that have become replaced by commercial businesses.

“The purpose of the photos in the before and after project is to clearly spell out and provide documentation of not only what storefronts have been lost but also what is often lacking in what replaces them,” said the photographers.

The book depicts the dramatic alteration in the appearance of many familiar local spots in New York City. From 2001 to 2007, the book contains a good decade of how scathing rental prices are forcing out mom-and-pop shops which are being replaced with chain stores belonging to commercial businesses.

“The shop-owners frequently acknowledged that they were at the mercy of their landlords and the ever-increasing rents they charged,” and if the shop-owners could not meet the increasing rent, “big rent hikes meant that many small businesses closed to be replaced by chain stores or banks, which could afford the higher rent.”

According to the book, Max Fish, a bar located on the Lower East Side is an example of being a victim to rising rent costs. The bar opened in 1989 and its rent was a mere $2,000 a month, however after a series of rent increases and being opened for a good 24 years the bar closed with a reported $16,000 rent cost. The rent was due to increase again if the bar remained opened.

“Until you place them side-by-side and really look at the two photos, you cannot get the true sense of loss,” explained the Murrays, discussing how powerful the images taken are when you show what was beside the what is.

The two also add, “the trend we noticed very early on while photographing the original stores was that if the shop-owner did not own the entire building, their business was already in jeopardy.”

Mom-and-pop shops are not the only familiar local spots being replaced by commercial businesses. Late last year, 5 Pointz–5 Pointz: The Institute of Higher Burnin’ or the 5Pointz Aerosol Art Center–was an outdoor graffiti haven considered an art cultural center to many was white-washed—the numerous art pieces that were spray-painted on its wall was marked out with white paint—by the builders owners. 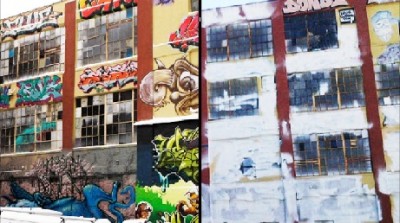 The white-washing came after 5 Pointz owner and supporters lost am ongoing battle to remaining standing. The building is scheduled to be torn down and make way for new condos and business shops in its place.

While the book can be a bit grim showcasing the demise of familiar shops, shops that are either replaced by corporations or gutted to the group, the book also contains some hope.

Among some of the photos taken, the Murrays have included side-by-side photos of old shops being replaced not by large corporations but fellow and new mom-and-pop shops. These images show some hope that not all is being taken over by large commercial businesses but there are still regular folk with businesses of their own trying to make it in this ever changing world.

Catch Up, Get Ahead, Explore
Belinda Ortiz Path to Success from a troubled Past
Translate »