Major League Baseball super star Robinson Cano, second baseman for the Seattle Mariners, has been fortunate in life and now he is giving back in a big way. This month LatinTRENDS celebrates the benevolent efforts of this outstanding Dominican athlete. In his latest philanthropic endeavor, Cano and his non-profit organization RC22 teamed up with The Dominican Republic Education and Mentoring Project, DREAM, to build a high quality Montessori Preschool and Education Center in Cano’s hometown of San Pedro de Macoris. LatinTRENDS longtime partner of The DREAM Project recognizes Robinson Cano’s humanitarian commitment on November 12 at the 40/40 Club in New York. The Sueños 2015 The DREAM Project Annual Benefit will be co-hosted by past LatinTRENDS Magazine cover stars Leslie Grace and Henry Santos. Visit dominicandream.org  for tickets and donations. 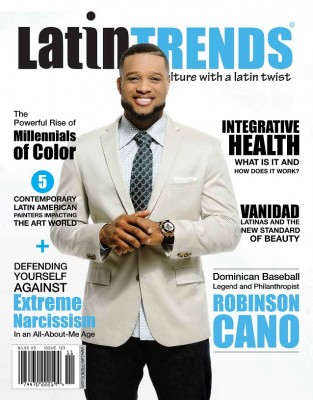 She left her beloved New York to study acting in Los Angeles, and now Celines Toribio commands the screen in a biopic of the first Dominican ever to appear on Hollywood’s silver screen, Maria Montanez. The film, “Maria Montanez La Pelicula,” is set in the 1940s, and Toribio tells LatinTRENDS that she not only stars in the film but she also a producer.

Continuing in the world of film, LatinTRENDS interviews actors Luis Ramos and April Hernandez Castillo who star in the film “The Stockroom.” The film’s creator and lead actor, Victor Cruz outlines his life as an inspiration for the project. This month’s issue also highlights new music talent like Manny Soundz and rising star Lauren Giraldo.

As the holidays approach many are concerned with health and this issue spotlights a new health trend: integrative health. Integrative health coach Cova Nareja breaks it down in an interview. See this month’s issue for more in health and wellness topics like mental health, sibling rivalry, plastic surgery and how to cope with narcissists.

Download the LatinTRENDS app on all iPhones, iPads and Androids via Pocketmags.com today

Our vision is to be the leading platform for the bicultural in all cities throughout America.  Armed with a constant and never-ending quest to bridge cultures and expose a new generation of talent before anyone else.