Sanders & Clinton battle it out for Latino votes in California!

Sanders & Clinton battle it out for Latino votes in California! 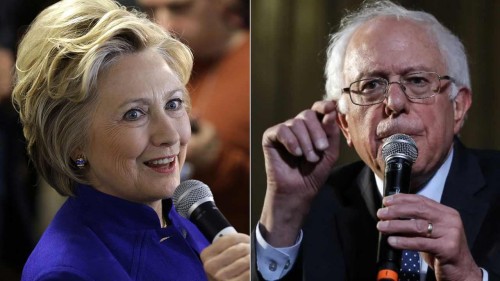 Bernie Sanders & Hillary Clinton are about to battle it out once again when it comes to snatching the next set of Latino votes as the Californian primary is right around the corner.

But which democratic hopeful could win big with Latinos on the West Coast come June 7?

According to some political analysts, when it comes to winning over Latinos in California, Sanders could be clawing at the win considering Clinton is still favored amongst the community and is already described as to having a “near-lock” win in the state.

Amongst Latinos, according to an independent field poll taken last month, it revealed that while Clinton had a 7 point edge with Latinos over Sanders, Sanders could still be a challenge since he is closing in with a 3-to-1 margin attracting young Latinos.

According to Ben Tulchin, a Sanders campaign pollster, Sanders could have “a real potential to win Latinos,” in California because when it comes to acquiring votes from the state he “needs an influx of young Latinos and he’s getting it, it’s happening.”

In California alone, it is estimated that as many as 2 in 10 voters are Latino. And of those voters, many of them are first time voters who are eligible to—and want to participate—in the upcoming election that decides who will be a fitting leader.

And this is where the early predications for Clinton’s ultimate win may be too quick a draw. With Sanders favoring well amongst young Latinos, he also happens to favor well with first time Latinos of any age.

“I don’t ever feel like I believe politicians, but I believe him,” says Mercedes Hart, 35, who lived for years in Mexico. Hart, like many of Sanders’ voters who have been showing support for him, has backed the Senator finding his stance on defending every day, workaday Americans within an economy divided by haves and have-nots to be appealing.

If Sanders is able to win California, snatching the state from Clinton, it is believe it would be a huge dent in Clinton’s campaign and will back Sanders argument amongst fellow Democratic party members that he can stand and win when in a race against the already identified Republican candidate Trump come this November.

However, while there are estimations of who within the Latino community could be voting for Sanders when it comes to Clinton there is a large probability who will likely back her to become the Democratic nominee.

“The most likely Latino voter is still an older voter in California,” said Jamie Regalado, former executive director of the Pat Brown Institute of Public Affairs at California State University, “And those voters, almost to a person, will stay with Clinton.”

With a sense of familiarity with older Latinos, Clinton also has a significant backing from California’s prominent Latino politicians. With endorsements from the likes of former Los Angeles Mayor Antonio Villaraigosa to Secretary of State Alex Padilla and U.S. Rep. Xavier Becerra as well as many more, Clinton’s endorsements could further sway Latinos in California into voting for her.

With both presidential hopefuls hitting the campaign trail and publicly addressing key issues Latinos want addressed like: education, immigration and wages. While there is no definite knowing who Latinos in California will vote for, one interesting fact is that there is a pulling factor that has made Latinos, of various ages really, become registered to vote so that their votes counts.

And this is in thanks to the unsavory commentary of one Donald Trump who’s hateful comments have resulted in a somewhat positive outcome.

June 7 is steadily approaching, and soon we will have a clearer picture of who—either Sanders or Clinton—will be going head-to-head with Trump come this November to become our 45th President of the United States of America.