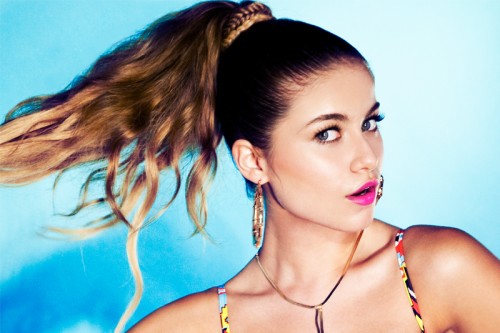 Sofia Reyes is about to become a big name in the U.S. and could become the next pulling force to stir a new Latin explosion in the music industry.

Two years ago, bachata superstar Prince Royce signed the Monterey, Mexico native to his label called D’León Records, and since then Reyes has been garnering a reputation within the music scene.

Collaborating with reggeaton veteran Wisin, electronic dance music trio Cash Cash, singer Kendal Schmidt, and Prince Royce himself, Reyes could be the leading force that brings a second Latin craze similar to the one seen back in 1999 that introduced Americans to Ricky Martin, Marc Anthony, and Shakira.

“I’m really thankful for [Prince Royce’s] support,” said Reyes, 20, in a recent interview about her climbing success. “He’s an amazing person and an amazing artist. He works so hard, and that’s why I admire him so much, and I am just really thankful that artists like him and Wisin and Kendal Schmidt support my career.”

With only a few singles to her name, Reyes is nearing the release of her first studio album which some fans are expecting to drop in June.

“I’ve been working on it for three years—which is a long time—and I’m actually working on my second album [as well], because I don’t want to waste any more time,” she said. “These singles are just a little bit of what my album is going to be.”

Reyes albums will feature some songs in English, some in Spanish, and some that are in both. Much like Ricky Martin, Marc Anthony, and Shakira, Reyes album and would surely impact more audience members in the country.

“I grew up listening to English music, to Spanish music – so singing in both languages for me is very natural,” she said. “It’s not forzado (forced). I feel like people all around the world keep listening to my music. Even people who don’t speak Spanish love my Spanish songs, which is really cool. I feel like music has no rules.”