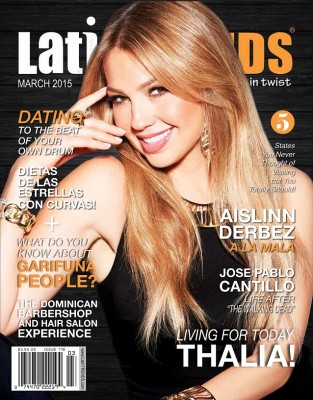 Thalía—she is “The Queen of Latin Pop,” and “The Queen of Telenovelas.” She is an author, radio presenter and fashion designer. This month, the mega star speaks with LatinTRENDS about her fashion collaboration with Macy’s, her relationship with her fans, and the source of her positive energy.

The March issue is chock-full of emerging talent to watch including Allan Maldonado from the hit comedy “black-ish”; the beautiful, Jessica Meraz from ABC’s television drama “Chasing Life”; Jose Pablo Cantillo, formerly on AMC’s “The Walking Dead” now starring in the film “Chappie”; talented daughter of Eugenio Derbez, Aislinn Derbez talking about her new film “A La Mala”; and Martha Higadera who stars in the new film “McFarland, USA” alongside Kevin Costner.

This issue also features LatinTRENDS exclusives such as “The Backdoors to Entertainment: Latinos Use Social Media as Entry to Stardom,” and an inside look at a special part of the Latino community and culture with, The Dominican Barbershop and Beauty Salon Experience, which is now a cultural trend in New York and other cities throughout the east coast

The promise of spring is in the air and LatinTRENDS provides this season’s fashion highlights. From brightly colored high heels to man-bags, this issue defines what’s hot right now.

Latinos are globe trotting more than ever, but what are the five states many people have not thought about visiting but should? LatinTRENDS offers suggestions in this month’s travel section.

For advice on personal development see LatinTRENDS’ health and wellbeing pieces, “Dating to the Beat of Your Own Drum,” “Dietas de Estrellas con Curvas” and “Managing Your Expectations.”

The March issue’s business section uncovers talent on the rise in “Latinas in Technology,” naming notable Latinas in the STEM fields and organizations aimed at supporting and encouraging Latinas who want to study and work in the field of technology.

This issue also peers into “The Auto Industry and its Latino Consumers.” Find out what Latino consumers want in a vehicle, and which motor companies are doing the most to attract Latino customers.

United We Dream – The Inspirational Movement of Cristina Jiménez for US Immigrants
FLASHBACK: Celia Cruz on Sesame Street! [VIDEO]