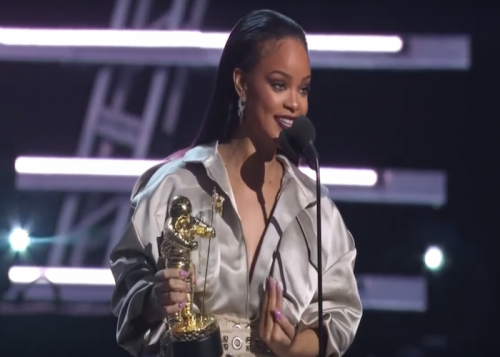 By having over 200 million records sold, eight studio albums to her name and 14 number one singles in just a little over a decade Rihanna became this year’s recipient of the Michael Jackson Vanguard Award at the Video Music Awards.

While she may not have beat out Michael Jackson in records sales (around 600 million), she did beat him out this year in the amount of number one hits she has (his is 13).

The Barbadian hitmaker opened the show to a slew of her biggest pop songs dancing in a bubble gum cutout outfit and killing it on the dance floor.  This was only the first of four medleys she had throughout the night.

Hyperactive comedy duo Key and Peele spent the show commentating on the presenters, winners and performers while trying to create meme-worthy catchphrases of the night’s most momentous occasions. Some of their jokes were spot on, the rest were simply flat and repetitive sexual innuendos.

The most anticipated act of the night was none other than Britney Spears. Nine years passed since her lackluster performance in 2007, in which she looked more like a deer in the headlights instead of a pop princess. On stage, she had a steamy musical number with rapper G-Eazy of her hit “Make Me,” which was a definite return to form for the singer-dancer. Later they both performed one of his hits, “Me, Myself and I” to a cheering crowd.

Presenter Alicia Keys highlighted that it was the anniversary of the “I Have a Dream” speech and later gave a stirring poem, in which she said “that all women and men are created equal,” before she announced the nominees for Best Male Video.

Calvin Harris won for “This is What You Came For,” which was co-written by his former beau, Taylor Swift, who he definitely did not thank.

Kanye West was Kanye West as he made non-sequiturs about his music idols, his love for his wife and his feud with Taylor Swift, in which he addressed his controversial music video “Famous.”

It was an expression of our now, our fame right now, us on the inside of the TV. The audacity to put Anna Wintour next to Donald Trump. I put Ray J in it, bro. This is fame bro. I see you Amber…my wife is a [gangsta], not a lot of people’s wives would let them say that.

West later referenced the high level of crime in his native Chicago, shouted out Chance the Rapper and finally introduced his “Flashdance” inspired video “Fade.”

Not to be outdone, Beyonce took the stage for almost 20 minutes as she did an angelic rendition of “Pray You Catch Me,” which she followed up with a racy “Hold Up” where she smashed the camera with a baseball bat and topped it all off with an Olympic-like synchronized “Formation” dance that is worthy of a gold medal. She was later presented the Video of the Year Award by four of the Final Five od the USA women’s gymnastic team.

Jimmy Fallon shocked the audience by dressing up as Ryan Lochte and wisecracking about how he wrote “Sorry,” instead of Justin Bieber, which left the swimmer’s rival, Michael Phelps, in stitches.

Rihanna rounded out the night with medleys of her soul, dancehall and R&B songs showcasing some of her best vocals. Her performances were raw, powerful, sexy, emotional, and definitely unapologetic. In other words, truly her.

The sweetest moment of the night, however, was when Drake in a sharp tuxedo presented her the Vanguard Award and reminisced about first meeting Robyn Rihanna Fenty in 2005 as an extra in her first music video as she beamed at his congratulatory speech.

We loved the woman who hasn’t changed since day one. She’s someone I loved since I was 22-years-old.”

Rihanna would go on to remark on how her award was so much bigger than herself.

My success started as my dream. But now my success is not my own. It’s my family’s. It’s my fans. It’s my country’s. It’s the Caribbean as a whole. It’s women. It’s black women.“

When she finished her speech she walked off the stage with Drake hand in hand. It was truly a remarkable night for women indeed.