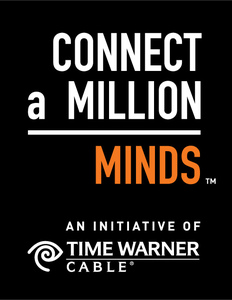 Time Warner Cable, which launched its Connect a Million Minds (CAMM) initiative with President Obama in 2009, today returned to the White House to launch a new segment of its $100 million campaign to inspire the next generation of problem solvers by connecting young people to the wonders of science, technology, engineering and math (STEM). The “STEM in Sports” campaign will offer parents, coaches and other adults the opportunity to get kids interested in STEM by highlighting the roles these subjects play in sports.

“Time Warner Cable applauds President Obama for his Educate to Innovate initiative, which raises awareness of STEM as vital to the country’s continued economic growth,” said Glenn Britt, Chairman and CEO of Time Warner Cable. “More than 50 percent of the fastest-growing occupations in this country require math or science skills. CAMM is inspiring young people to become interested in these important subject areas, and our STEM in Sports campaign will broaden the appeal of this initiative even further.”

“On and off the field, science and math are a winning combination,” said Cruz. “I’m personally committed to helping the next generation succeed, and letting them know that the path to success is taking an interest in these important subjects, even though they may be hard. It is an honor to be at the White House representing Time Warner Cable and I’m thrilled to be part of the Connect a Million Minds campaign.”

In addition to public service announcements, the connectamillionminds.com website will feature a new STEM in Sports microsite. The microsite will feature videos of athletes discussing how STEM subjects impact their sports. It will also have downloadable educational materials that provide parents and coaches with ideas on how to infuse STEM learning into sports. In addition to Cruz, athletes that have agreed to participate in the STEM in Sports campaign include Ian Poulter, Kasey Kahne and Jeff Gordon.

The White House and Time Warner Cable also invited Greyson McCluskey, a 16 year old resident of Indian Trail, N.C., to participate in the White House Science Fair. Greyson was the national winner of Wouldn’t It Be Cool If… , a 2012 contest presented by Time Warner Cable and i.am FIRST, founded by artist, entertainer and entrepreneur will.i.am. The contest challenged youths to dream up the coolest thing to make their lives, community or the world more awesome, and then explain how STEM could help bring their idea to life. Greyson’s wining idea was the Baby Safe Rider, a mechanism for car seats that would detect the onset of high temperatures in babies as a way to address the rising incidents of vehicular hyperthermia fatalities.

Greyson will present his project, now known as Tempro: Thermal Protection Solutions, at the White House Science Fair. He will be speaking with attendees about his journey to bring his idea to life and establish a business around his innovative and life-saving concept.

Time Warner Cable’s (TWC) Connect a Million Minds (CAMM) is a five-year, $100 million philanthropic initiative to address America’s declining proficiency in science, technology, engineering and math (STEM). Using its media assets, TWC creates awareness of the issue and inspires students to develop the STEM skills they need to become the problem solvers of tomorrow. Program highlights include: original PSAs that challenge public perceptions of STEM; a unique website where the public can pledge to connect young people with the wonders of science; “The Connectory”, an online resource for parents to find informal STEM learning opportunities in their communities; grants to non-profit organizations that bring after-school STEM learning to students; TWC employees, over 50,000 strong, who volunteer their time at events like science fairs and robotics competitions. National partners include CSAS (Coalition for Science After School) and FIRST (For Inspiration and Recognition of Science and Technology). Local TWC markets are activating CAMM across the country with community-specific programs and partnerships. To find out more and to take the CAMM pledge, visit www.connectamillionminds.com.