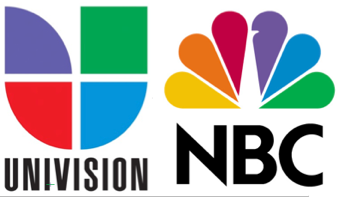 Former No. 1 network NBC has fallen to fifth place in the Nielsen TV ratings during the important February sweeps period for the first time behind Univision.

Sweeps occurs three times for four-week periods each year when networks flood TV audiences with programming in the hopes of giving their ratings a boost when Nielsen surveys. In the first 20 days of February sweeps, NBC averaged a 1.2 rating in the 18-49 demo while Univision has averaged 1.5. CBS (*4.9), Fox (2.0), and ABC (1.7) make up the top three.

NBC actually started the TV season off strong with a 2.9 rating average in the 18-49 demographic with hits like “Revolution” and “The Voice” plus Sunday Night Football and even won November sweeps. But once those shows went into hiatus in November and December respectively NBC’s numbers quickly dropped. “Smash,” a Broadway-themed drama starring Katharine McPhee and Debra Messing was NBC’s hope for a ratings sweep but the show’s second season premiere on Feb. 5 was down a 71 percent in viewers from the series debut last year and 39 percent from last season’s finale. “Do No Harm,” which starred Steven Pasquale as a neurosurgeon with a dark side flopped and was cancelled on Feb. 8, after just two episodes. More contributing series fails included The Jenna Elfman and Bill Pullman comedy “1600 Penn,” about a First Family in the White House and “Deception” about a detective who goes undercover in a wealthy family to solve a murder.

Univision, which has the biggest Spanish-language TV audience in the world picked up viewers from its continued news and coverage of Jenni Rivera’s unexpected death and has also seen strong demo ratings for its telenovelas like “Por Ella Soy Eva,” “Amores Verdaderos,” and “Amor Bravio.” It is the first time the Spanish-language network has beaten NBC and the first time it has come in fourth place in an in-season sweep. “Univision continues to set new milestones while our English-language competitors continue to see declines,” said Randy Falco, president and CEO of Univisión Communications. “We look forward to continuing this momentum and to providing viewers across the country with the content they crave each and every day.”

Deadline’s Dominic Patten stated “Univision has bested NBC every single night of the sweep so far among adults 18-49 and is poised to overtake NBC for its first fourth-place sweep finish in the demo.” Bravo for Univision!