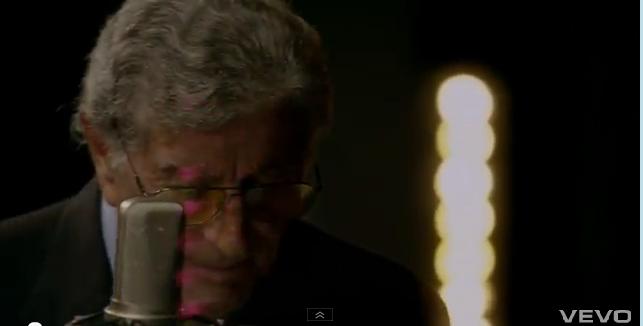 , America’s Tony Bennett and Mexico’s Vicente Fernández will meet on stage live to perform at the Prudential Center in Newark, NJ on Sunday, September 30. Tony will make a special appearance during Vicente’s scheduled concert that night to perform their duet of the song, “Return to Me (Regresa A Mí)” which the two recorded for the crooner’s forthcoming album, TONY BENNETT: VIVA DUETS – set for release on October 22nd. With millions of albums sold and decades of performing to live audiences between them, these two giants of the US and Latin musical world performing live together for the first time is a historic moment. Tony flew to Guadalajara, Mexico earlier this year to record their duet of “Return to Me (Regresa A Mí)”, a song made famous by Dean Martin, which will be included on VIVA DUETS set for worldwide release on Monday, October 22nd.

In other VIVA DUETS news today, Tony’s collaboration with Marc Anthony – “For Once In My Life” is available starting today on iTunes and Amazon. Look for Entertainment Tonight to broadcast a special interview and glimpse inside the recording studio tonight. You can also see the full video now at ET Online, followed by the VEVO music video premiere TOMORROW, September 26th.

To learn more about the project, watch the official album trailer here: http://www.youtube.com/watch?v=NPaqcpQWE2c

VIVA DUETS is currently available for pre-order at Amazon http://amzn.to/OptuTc as well as iTunes http://smarturl.it/vivaduetsitunes

[Before they made it] 2006 Interview Of The Now Celebrated DJ & Radio Personality Alex Sensation
Entertainment Mogul Haim Saban Launches Saban Music Group With $500 Million
Translate »
%d bloggers like this: