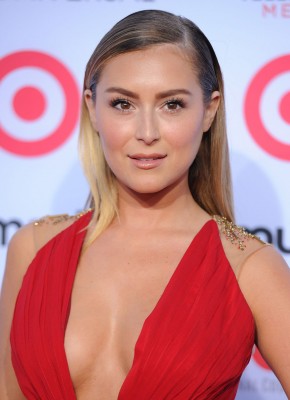 Alexa Vega who is known for her break through role as Carmen Cortez in Spy Kids is now using her Star Powers to fight the sensitive issue of domestic violence. Vega along with many other celebrities, one of whom is Joanna Garcia Swisher, have partnered with Mary Kay.

Mary Kay has taken initiative against domestic violence with their “Don’t Look Away Campaign” and their strong foundation that supports women and the fight against domestic abuse. They invited women from all over the nation to share the opportunity to be flown to Hollywood to produce documentaries that inspire, educate and create a national conversation about the issue of domestic violence.

Alexa Vega, alongside other women distressed by this issue, stand and work together to say “No more violence”. She is truly a inspirational Latina celebrity to all women.

She has overcome personal struggles

Knowing that PenaVega is a highly popular actress, successful singer, and has a considerable personal fortune, one might assume that her life is easy. However, this is untrue. Even the rich and famous like PenaVega can face terrible challenges. For the actress, this came in the form of bulimia.

PenaVega announced on Dancing with the Stars that she had long struggled with bulimia, but had recovered. It is inspiring to hear that someone who has endured the ruthless scrutiny and beauty standards of Hollywood since her childhood has managed to regain her health.

While it is obvious that PenaVega is a fantastic actress, as she has been entertaining thousands of fans since her childhood, she actually possesses a wide range of talents. In addition to acting, she is a highly accomplished singer. Further, she is fluent in Spanish and is a very experienced gymnast (a skill which no doubt helped her perform her stunts). Although PenaVega is celebrated for her acting ability, most people are unaware of just how diverse her skill set truly is.

Performs her own stunts

While the Spy Kids movies are fun, humorous, and filled with interesting characters, it is their action and excitement that truly captivates audiences. A big part of this excitement comes from PenaVega, who performed many of her own stunts as Carmen Cortez. Her athletic ability, bravery, and talent all combined to produce her most popular role. Fans of the series should be grateful that PenaVega was able to commit to her role so much.

She is passionate about her faith

PenaVega is a Christian, and she is very proud of her faith. She has stated that her religion is the most important thing in her life. Her Instagram posts which announced the birth of her son, for example, were filled with thanks and praise for God. Perhaps most notably, PenaVega routinely devotes a portion of her YouTube channel vlogs to her devotional Word of Wisdom.

She is an accomplished musician

While she is best known for her considerable acting ability, PenaVega is also an accomplished singer. Her acting and singing have been closely tied, as she provided songs for the soundtracks of all three Spy Kids movies. She released singles called “Isle of Dreams” and “Game Over” to coincide with the release of the second and third films in the franchise, respectively. She has also provided music for Reno! The Genetic Opera and Ruby & The Rockits.