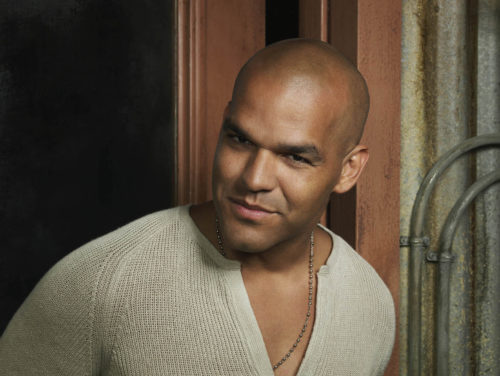 Amaury Nolasco see’s no barrier in his acting career. Raised by a family of doctors in Puerto Rico, he aspired to follow the footsteps paved for him and go to medical school just like many before him. Discovered on a beach by his home, he said “Somebody asked me if I wanted to be in a commercial” This in turn led to more commercials, TV shows, and a rising interest in acting. At the time when Nolasco was studying at the University of Puerto Rico, focusing on biology with expectations to become a Doctor, he also decided to enroll in acting class.

“The class that I took was at 7 o’clock in the morning,” he says. “And I LOVE to sleep. But it was the only class available.”

According to Amaury, the class changed his life and he was greatly inspired by his teacher Dean Zayas, who encouraged him to take on acting to his utmost potential. Nolasco’s parents weren’t too fond of this idea, they didn’t even take him seriously,

“They thought I was trying to be funny,” he says. “They said, ‘but you’re going to finish your degree, right?’ School was very important.”

Amaury finished school and moved to New York with expectations of becoming an actor but was told the Spanish accent was something he had to overcome.

“For many years they told me, ‘You have to work on your accent, blah, blah, blah.’ Just because I have an accent, does that mean that I can’t speak?” But now, Nolasco says the acceptance of Latinos on television, and the growing recognition of their buying power as the country’s largest minority, is becoming so much greater that now he’s hearing, “We need a thicker accent. And we’re not only playing the murderers anymore. We’re not only playing the characters who get killed off after the first couple of scenes. We’re also playing the good guys.”Even if the good guys bring heartache to other good guys.

Amaury Nolasco has inspired Latino celebrities in the industry to overcome barriers that latinos are put infront of and never let go of a dream.

Nolasco appeared on the cover of LatinTRENDS Magazines in October of 2008, which was then known as “Dominican Times”

SOFIA VERGARA IS LAUGHING TO THE BANK
Video of Ronda Rousey & Nick Diaz Grappling on Mat
Translate »
%d bloggers like this: