Where Were the Latinas at The Oscars?

Where Were the Latinas at The Oscars?

Of course I’m biased, but I think Latinas rock the red carpet like no one’s business and the Oscars are no exception. The Academy has embraced us to an extent and always given the spotlight to a Latina name at some point during the show. In fact, who could forget when Cameron and Jennifer presented together last year and flaunted their Caribbean curves. This is why I was a little shocked when Penelope, Jennifer, Cameron, and Jessica were no where to be found at the 2013 Oscars. I won’t ignore that Salma and Zoey were there to represent, but where were our other staple Oscars ladies? And how about the Eva’s!? I’m pretty sure Longoria is usually everywhere! Come to think of it, I haven’t seen Mendes anywhere in awhile, so….either way…

Though I have no theories in existence for why some of the ladies didn’t grace the stage, I do have an opinion as to why Jennifer may have called out sick. I think she let it be Ben’s night. For someone who loves taking center stage, I think it was humble and generous to give the night to Ben. Because let’s face it, the media is always looking for a reaction or a photo op to create a story. And I think Jennifer’s absence left no room for that. Again, this is just an opinion…but ain’t it a coincidence?

I dug up some oldies online for you! Cameron and Jennifer at last year’s Oscars showing us what they’re working with. 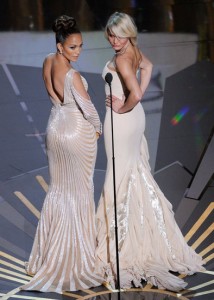 Have You Tried This Yet? Glaming Up the Everyday
JUAN LUIS GUERRA WILL RELEASE “ASONDEGUERRA TOUR” ON APRIL 16
Translate »
%d bloggers like this: