Who will Latinos vote for in the upcoming 2016 New York Primary?

Who will Latinos vote for in the upcoming 2016 New York Primary? 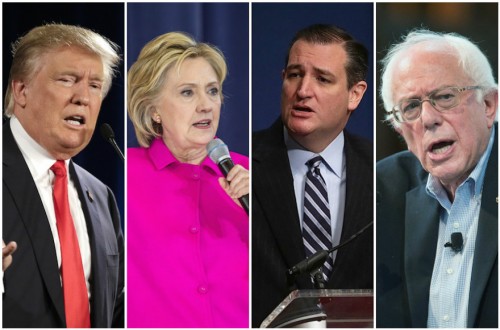 As April 19th steadily approaches and New York prepares to cast their vote in who amongst the Democratic & Republican nominees will be one more step closer to becoming our 45th President of the United States of America, a recent poll has revealed whom among the Latino community along the east coast could support.

According to a poll by the Public Religion Research Institute (PRRI)—an American nonprofit, nonpartisan organization dedicated to research and education at the intersection of religion, values and public life—in unison with The Atlantic, found that Latinos are quite split between one set of nominees while obviously discontent with the other.

Can you guess which is which?

Well if not, I can break it down for you.

According to the poll, when it comes to the Democratic nominees former- United States Secretary of State & Senator of New York Hillary Clinton & Senator of Vermont Bernie Sanders, 47% of Latinos are pulling for Clinton to become our next president with 48% wanting Sanders to take up the future leadership.

Currently, Clinton has been able to score big amongst Latinos earning victories in key Latino states like Arizona, Florida, and Texas meanwhile Sanders has found support from Latinos in Colorado and Illinois. However, when it comes to another highly populated state like Nevada Latinos are seesawing between the two Democratic candidates.

“Latino voters are more likely to be younger than white votes and that’s been part of his appeal,” said Robert Jones, CEO of PRRI, explaining the sudden shift of Latinos backing Sanders pointing the spotlight on this country’s young population or millennials as they’ve been called, “He’s been able to be very strong among younger voters.”

In-regards to millennials, analysts of the upcoming electorate for the 2016 Presidential Elections find that of the voters to go to the polls Latinos account an estimated for 44%. It’s this high number that both Clinton & Sanders have been keen on attracting.

When looking outside of the Latino community, Clinton’s next strongest support comes from Black Americans who favor her an estimated 63% to Sanders who stands at an estimated 30%, so says the poll’s findings.

Now, what of the Republican Candidates?

While it is truly appalling that he is still in the race, Donald Trump is still finding a strong ground amongst Republican voters to his GOP hopeful & somewhat challenging opponent Senator of Texas Ted Cruz. Despite the support in their party, both candidates are finding it difficult to gain support amongst Latinos.

According to the poll, 83% of Latino voters have an unfavorable opinion to Trump meanwhile 51% also find Cruz to be unlikable as well. While Trump has been more antagonistic in-regards to his racist rhetoric regarding immigrants & Latinos, both Trump and Cruz have been confronted on their immigration stances which have a huge importance to the Latino community.