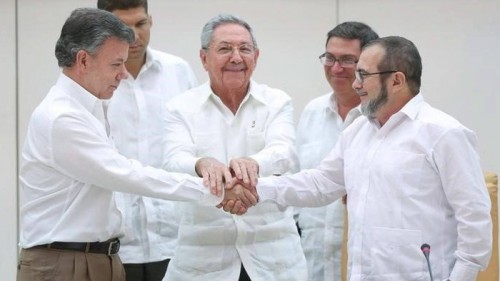 After nearly 60 years of civil war, Colombian president Juan Manual Santos and the leader of the Marxist rebel group FARC, Fuerzas Armadas Revolucionarios de Colombia, Rodrigo Londoño Echeverri, signed a peace treaty but the public was also able to vote on said treaty. The result: rejection. Though the war has cost more than 220,000 lives and displaced millions of others, both in the major cities as well as the country sides, the Colombian people were nearly evenly-split on this agreement, and possible those who voted no felt that what was in the peace treaty wasn’t enough. According to NPR, much of the country’s population on the Caribbean coast couldn’t come out to vote with Hurricane Matthew in their midst; they were in favor of the agreement. Nearly two-thirds of the population did stay home, however.

This peace treaty didn’t simply state to end the fighting. Both parties were looking to agree to not only laying down of arms but for the FARC to be converted to a political party that would eventually participate in democratic elections. Being that the FARC is a designated terrorist organization, what about the atrocities they have caused all these years, while funding themselves through the drug trade and extortion? The treaty states they would have to confess to their crimes but wouldn’t face jail time and would receive some benefits, which is what stopped many from voting yes to this agreement.

The FARC was founded by farmer Manuel “Sureshot” Marulanda in 1964 to peacefully fight against inequality in Colombia at the time, which was already a violent period for the country. He was inspired by the Communist Revolution in Cuba, hence the group’s Marxist-Leninist ideology. One can say that the FARC has been in a bit of a decline with Marulanda’s passing in 2008, capturing/killing of other leaders, and shrinking ranks; these events could have lead the current leadership to the negotiation table with Santos.

Negotiations for this peace deal took about four years and happened in Havana; the deal was signed with Cuban president Raul Castro present, along with UN Secretary General Ban Ki-moon and US Secretary of State John Kerry.

Santos assured his country that he would keep the negotiations going until a deal is made that they can agree with.