Young Voices: Why are Latinos not signing up for Obamacare?

Young Voices: Why are Latinos not signing up for Obamacare? 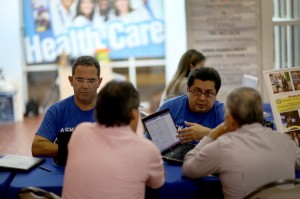 Passed back in 2010, the Patient Protection and Affordable Care Act, or what has commonly become known as Obamacare, is a law which required millions of uninsured American’s to take part in enrolling into a program to browse through insurance marketplaces for healthcare plans and register in order to become insured.

While highly debated by some but support by most, Obamacare was significantly accepted amongst Latinos. In a survey by the Pew Research Center, released in September, in comparison to 29% of whites who found the law favorable a record 61% of Latinos did as well.

While President Barack Obama’s administration has not released a figure of enrollment into Obamacare that is based upon ethnicity, officials closely watching the enrollment are not too hopeful about the turnout amongst Latinos living in the country.

And according to associate director Mayra Alvarez of minority health at the U.S. Department Health and Human Services the lack of hope regarding Latino enrollment not being high isn’t surprising.

“I would not be surprised if those numbers aren’t what we want them to be right now,” said Alvarez.

Well, concerns about the lack of Latino turn out may be due in part to a fear of what the enrollment may bring. For some Latinos taking part in the initiative taken up by President Barack Obama to have Americans sign up for medical insurance may be a fear of drawing the attention of immigration authorities.

According to advocates of the policy, the estimated 10.2 million Latinos who are eligible for the new insurance plan may not be enrolling because of the possible scrutiny they may endure if they are picked up on the immigration police radar.

Supporters of Obamacare feel that Latinos may not be signing up because threat of immigration enforcement. Due to the possible family dynamic where one or two members may be an undocumented citizen, Latinos may not feel safe enrolling and casting a spotlight upon their family.

For example, a Latino family can contain one or both parents who are undocumented immigrants unlike their children who do have American citizenship. Hugo Ramirez, the program manager of Vision y Compromiso described how the family circumstance mentioned earlier is quite common.

At the event held last month by Vision y Compromiso—an organization which dedicates its efforts to improving the health amongst the Latinos—in Los Angeles, Ramirez encountered a family who feared the process of enrolling due their family’s status.

The mother, a house cleaner, and father, a construction worker, did not want to provide information to Covered California—California’s new health insurance exchange that provides affordable health coverage and which receives funding to promote Obamacare—because they feared that since they were undocumented, unlike their three children, they would attract attention from the U.S. immigration officials and expose their family to future trouble.

After the undocumented parents were informed they would not incur any attention from immigration authorities if they enroll for their children, ages 17 and younger, Ramirez disclosed the parents were motivated to sign up.

According to Daniel Zingale the senior Vice President of the California Endowment, “a lot of mixed-status families are afraid that if they enroll, that the government will come and divide up their family through deportation,” and this fear is currently being targeted to address.

Since the six-month enrollment period began back on October 1st, community leaders had flagged this fear held by undocumented citizens. Obama’s administration has also started to resolve immigration concerns; the U.S. Immigration and Customs Enforcement agency has said that personal information submitted by insurance shoppers would not be used for immigration enforcement.

So why is it important that Latinos begin to sign up for Obamacare?

In California alone it is reported that the state has the largest Latino population in the country. Of the entire 38% of Latinos living in California only 13% of Latinos have enrolled so far, according to the state’s online marketplace Covered California. If more Latinos enroll it could be vital to the law’s success.

With more people signing up for healthcare under the Patient Protection and Affordable Care Act it could help balance the costs that cover the elderly and sick living in this country. Latinos are one of the largest populations with a high percentage of younger citizens who if they begin to sign up can make the coverage of the elderly and sick more affordable as the law promises.

In short the law demonstrates a Pay It Forward ideology or phrase which believes that if you reply to a person’s kindness to oneself by being kind to someone else you are continuing a cycle of generosity.

Patient Protection and Affordable Care Act, or what has commonly become known as Obamacare, may appear frightening because of the stigma it has received by media and opponents, but instead of falling to the fear educate yourself. Go online and learn more about what the law is and how it can be beneficial to you and other people living in this country.

St. Jude Thanks and Giving® Campaign
We don’t just want to wish you a Happy New Year…