A.J. LEE: WHAT WE LEARN ABOUT HER IN “EVOLUTION OF PUNK” DOCUMENTARY

A.J. LEE: WHAT WE LEARN ABOUT HER IN “EVOLUTION OF PUNK” DOCUMENTARY 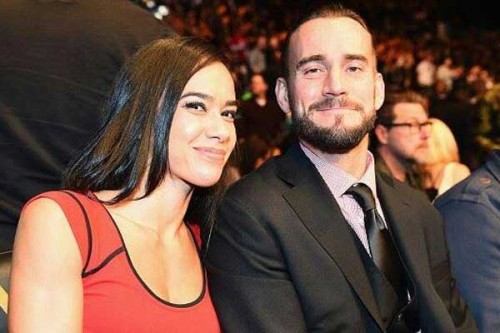 The four-part documentary “Evolution of Punk” which details the story of CM Punk and his UFC journey after leaving the WWE in January of 2014 has another star. She is mostly supporting cast but is as essential to the man who will be making his UFC debut on September 10th against Mickey Gall as anyone.

That woman is AJ Lee, real name April Brooks, formerly April Mendez, the Puerto Rican girl from New Jersey who went on to become a 3-time WWE Women’s Champion and married CM Punk after following him out of the WWE.

In the first episode of “Evolution of Punk” we see a woman of few words, easy with the laughter. But when she speaks its witty and you can sense the chemistry of the couple immediately. Punk even admits one of the reasons he left WWE was to focus on his marriage and remove a major stumbling block in his past relationships.

She is supportive but is not a fan of MMA and understands very little of it except that her husband’s dream is wrapped around it.

In episode two we get more of her. We find she doesn’t like watching him fight and admitted that even in WWE she could not watch for fear of seeing him get hurt. She observes his second sparring session and mentioned

“I dont think I freaked out once,”

“I think my nails went all the way through my arm.”

But her support knows no bounds. She can recognize how much he loves this. At dinner she points out that Punk’s stand up game was impressive knowing he doesn’t agree and professed how proud she was which makes a difference in a man’s psyche.

AJ has to be credited with allowing Punk’s decision to move to Milwaukee to get closer to training to not become an issue allowing him peace of mind though he would spend additional time from them to pursue the dream harder.

At the end of episode two, the shoulder injury that stopped his first training run would be explored in the third episode but seeing the results now you get a sense that they enjoy each other immensely and even when their pet dog pees a trail in their new apartment her giggle to his comment about living the “glamourous life” is a picture perfect example that though CM Punk is the focus of the documentary, AJ Brooks is the column that supports this whole building.

What’s hotter than a scorching July in Miami? Miami Swim Week!
Aarón Sánchez : No Longer in his Mother’s Shadow
Translate »
%d bloggers like this: