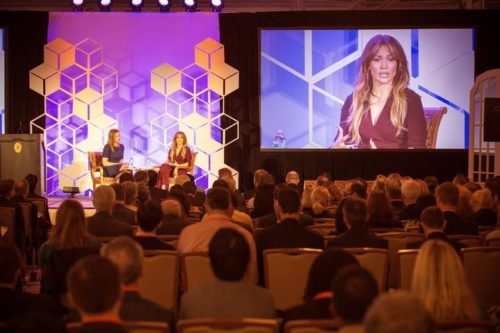 A couple of years ago while taking a detour from her usual celebrity outings, Jennifer Lopez made an unusual appearance at  VentureScape, a conference organized by the National Venture Capital Association in Silicon Valley, San Francisco to talk about potential business deals with the tech industry. It was a look at Lopez not as the star everyone sees on the screen, but as a businesswoman. She also delivered (masterfully) a sales pitch to the crowd of Innovators, techies and venture capitalist, who are the gatekeepers of billions of dollars in funding, that were in the room: “I feel like these worlds are so merged over the past few years,” she said of Hollywood and Silicon Valley while making her pitch for tech investors to hit up her business associates with ideas. My dream is to “build something that’s never been done before.” Her idea is to create a $1 billion business empire that goes beyond the usual stuff of celebrity. Come partner with me”

Lopez spoke on stage wearing an elegant pants suit, a far cry from the sexy outfits she wears on the red carpet. Her big gold circled earnings and sparkly jewelry however was a bit out of character for the mostly male venture capitalist in the room, but she came across as a sharp ambitious businesswoman who is very much aware of her brand, a term she used frequently. “Staying authentic to that image of an entertainer, mother, and woman of humble beginnings in a struggling Puerto Rican family from the Bronx is important, much like for any product, and it’s key to reaching a bigger audience of potential customers. That’s a big part of who I am, and my brand in a way.” Lopez said.

Aside from the sales pitch, Lopez stayed mostly inspirational by talking about her work ethic and her desire to change lives. A lot of it, however, echoed entrepreneurial mindset and spirit, she emphasized “thinking big” and “taking risks.”

What’s interesting to note is the fact that Jennifer Lopez is one of Hollywood’s most recognized celebrities for her film, television, and singing career, however what many people don’t realize is how much of a successful and astute businesswoman she is. She has lines of cosmetics, endorsement deals, a clothing line, perfume and cologne, a movie and TV production company, real estate holdings and she is also an investor. In fact, her brand alone is actually more profitable than most venture capitalist, as far as the law of averages between failure and success, according to a Harvard University study, VC funds on average have barely broken even since 1999. For more than a decade the stock markets have outperformed most of them, and since 1999, they typically fail with many investments in search of the big home run, such as Google, Facebook, Pay Pay, Uber, that most VC’s never find, except for the very fortunate few. Aside from her good looks and Hollywood status, Ms. Lopez knows how to make money.

The CIA’s Latino Hunt…Why They’re Coming For You!