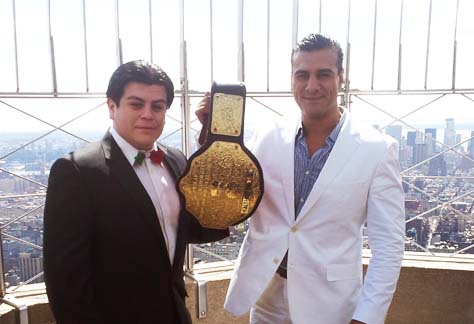 With WrestleMania 29 only a few days away I got to meet up with the World Heavyweight Champion Alberto Del Rio at the top of the Empire State Building on April 2nd. His personal ring announcer and friend Ricardo Rodriguez accompanied Alberto. After suffering a gruesome assault from his opponent Jack Swagger on Raw this Monday I asked the champion about what he was going to do to Swagger at WrestleMania, he replied “That’s easy my friend, I’m going to kick Swaggers ass at WrestleMania.”

The only thing Swagger did last Monday Night on Raw was pump up the Champ even more. The once heel turned face Wrestler is now being positioned as one of the WWE’s main Superstars. Some would say that Del Rio has the potential to be as great as the late Eddie Guerrero. When asked about this Alberto Del Rio said “Soy muy Orgulloso y lo ago por Mexico. Vine para ser el mejor, para eso vinimos, para conseguir eso y mas.”

Jack Swagger and his manager Zed Colter are currently known for their political views against immigration and against anything they don’t consider to be “American”. I asked Del Rio if Jack Swagger was fighting for “Jack Swaggers America” what is Del Rio fighting for, he said “I am fighting for the Latinos, everybody, the Dominican community, anyone who faced discrimination en este paise. I’m fighting to retain my Championship.”

Don’t miss Del Rio vs. Jack Swagger at WrestleMania 29 on April 7th. The lineup includes John Cena vs. The Rock, CM Punk vs. The Undertaker, Triple H vs. Brock Lesnar, The Shield vs. Orton, Shamus, & Big Show, & more. See you at WrestleMania 29!