Could Homeless Youth be on the rise in New York City?

Could Homeless Youth be on the rise in New York City? 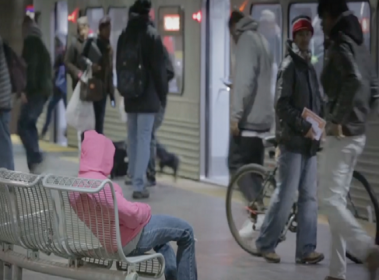 Let’s say that every day you exit the Port Authority Bus Terminal to make your way to work or to meet up with some friends, and on your way to your destination you notice the same young adult—let’s say around 16-years-old—sitting outside the AMC 25 theater located on Times Square.

What do you do?

In an effort to make the public more aware of the rising number of teenage homelessness occurring in this country , a child welfare agency called Bellefaire JCB has taken on the task.

Across Cleveland, Ohio the agency has placed faceless mannequins sitting in hunched over positions and dressed in regular clothing worn by teenagers with hoodies that contain messages announcing possible reasons behind teenage homelessness.

From “My dad kicked me out because I’m gay,” to “I’m too afraid to go home,” to “I’m missing and my parents don’t care,” and “My mom’s boyfriend hits me,” the hoodies are shining beacons trying to explain why teenagers are opting to live on the street. Feeling unsafe or either unloved at home, teenagers are running away and preferring to live on the streets to avoid issues at home.

“Homeless youth look different than homeless adults and are virtually invisible to most people,” said Karen McHenry, the director of Bellefaire JCB Homeless and Missing Youth Program. “Our street outreach team sees youth every day who are in crisis and in need of food and clothing. Homeless youth do exist in Cleveland, and we are excited that this campaign will give homeless and missing teens a voice.”

Before each of the mannequins scattered throughout Cleveland this month, they are accompanied with a floor sticker that provides information about the issue of teenage runaways and homelessness. The sticker also contains information about how the passerby can help.

“The average person rushing through their day does not see our youth,” added McHenry, “Homeless and missing youth are invisible to most people.”

The campaign is trying to combat the rising problem of homeless youth appearing in communities throughout the country. However, trying to combat the rising issues is not without its problems. The process of gathering information from teenage runaways themselves has been quite problematic. Last year, the California Youth Homeless Project released findings that reported that across U.S. cities there isn’t an accurate estimation of how many homeless citizens are actually teenagers because homeless youth do not want to face the stigma of being so.

For example, a report released by the New America Media revealed that among black homeless youth they are less likely to refer to themselves as being homeless in comparison to white homeless youth. By denying the circumstance of their situation, the reported number of homeless youth may be larger than it actually is.

Back in 2012, a Williams Institute study revealed that another cause of teenage runaway and eventual teenage homelessness is that among the teenage homeless an estimated 40% who seek assistance identify themselves as Lesbian, Gay, Bi-sexual, or Transgender.

According to the Latino American Youth Center, in this country there is an estimation that “1.35 million children are likely to experience homelessness over the course of a year,” and the factors for this is because of “poverty, high school dropout rates, lack of affordable housing, teen pregnancy and clashes in cultures are some of the factors associated with the noted increase in the number of homeless and runaway youth nationwide.”

The expected rise in homeless youth is quite troubling. Not only should the concern of our youth living on the street should be a serious matter to us, but what if being homeless leads to another identifier that may greatly impact the homeless youth? In-addition to the causes of forces teenagers to flee their home to the streets, some teenagers are opting to a life of crime in order to survive.

Whether it is because there is abuse at home, conflict with parents or immediate people in their lives, economic status, status of their citizenship, or the orientation of their sexuality homeless youth should be taken serious as homelessness. Times as is, is hard enough.

So to help out, become informed, and see what you can do watch the video below:

Protesting in Venezuela Turns Violent
The Puerto Rican Day Parade is Back On!
Translate »
%d bloggers like this: