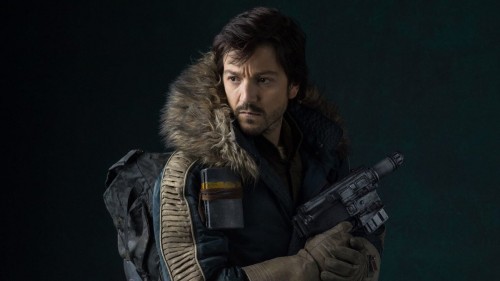 Finally Diego Luna can open up about about his latest role. It was roughly a year and a half ago when he was awakened at two in the morning by film director Gareth Edwards. After confusing his call for a possible drunk cousin he was given the news that he was to become part of the Star Wars Family. The catch was that he had to remain silent about it.

“You’ve got to be kidding! This is the best news but it’s not real until I tell my best friends,” Diego recalled thinking then, “Otherwise it’s like a dream.”

Well, two weeks from today it becomes all too real as a familiar face will play a Rebel Alliance intelligence officer Cassian Andor in the latest Lucasfilm “Rogue One: A Star Wars Story.” This will be a culmination of a dream for the now 36-year old veteran actor who as a child was a fan of the franchise.

“Killing a Stormtrooper it’s so nice,” Luna excitedly recalled, “That feeling of running and suddenly shooting and the guy falls, it’s so special. I’ve dreamed of that my whole life.”

The process of training for the role surely had to convince Diego that unlike “Y Tu Mama Tambien” or “Milk” he was going to have to go about this much more differently as he worked stunts with trained soldiers.

“I spent two weeks with ex militaries and did a lot of patrolling and camping and just listening to their stories.”

Luna took his beatings like a good rebel fighter and rested with an old friend while counting down the days until he could share with the world that he was going to be in the next Star Wars Movie. ”

Tequila is very good. One or Two at night,” Luna admitted, “You fall asleep, and when you wake up and you know you’re going to go shoot Star Wars, everything works.”

Diego Luna knows it real now. His ribs ache, the rehearsals were endless. But now, he is part of canon and for Luna, it’s your Star Wars Story also.

WHAT MY FAMILY TAUGHT ME ABOUT MY PUERTO RICAN ROOTS & PRIDE
23 Hispanic Americans that Were the First to Excel in Their Fields
Translate »
%d bloggers like this: