Where Are They? 43 Student-Teachers Missing in Mexico; Mayor may be connected

Where Are They? 43 Student-Teachers Missing in Mexico; Mayor may be connected 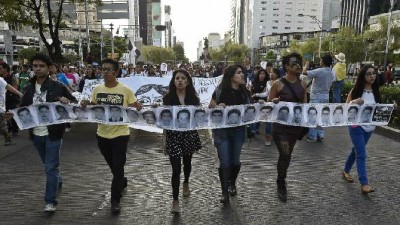 Back on Wednesday, thousands of people took to the streets within 19 states of Mexico to take part in a protest. The protest wasn’t against to the drug-war currently plaguing the country, issues with the government, but the protest was in-response to the disappearance—and now suspected murders—of 43 student-teachers from the Mexican City of Iguala.

An estimated 15,000 marchers, led by relatives of the missing student-teachers, took part in a mass demonstration demanding justice for the 43 student-teachers who vanished back in September where 57 student-teachers were originally reported missing—13 were able to make it home—due to law enforcement been identified as their kidnappers.

According to authorities, on September 26th a demonstration was held by student-teachers in order to raise money against budget cuts for state-financed teaching college, Ayotzinapa. Wanting to save the college in order to learn and eventually teach one day, the demonstrators hope to stir support instead they found themselves fighting for their lives.

During the demonstration, a bus carrying students traveling into the city of Iguala was shot at by a collection of police officers of the city with anonymous gunmen. A total of three buses were fired upon, and resulted in six people dying because of the incident. After the shootings, it was reported that local officers were seen taking surviving students off of the bus and corralling them into awaiting patrol cars. Allegedly, reports were released that some police officers confessed to handing the “arrested” students to local drug gangs who later murdered them.

The demonstration on Wednesday consisted of relatives, teachers, activists, and other concerned citizens who carried banners and pictures depicting the images of those missing. Among the banners and signs were messages demanding the government to find the students and take action to the culprits who may be behind the disappearance itself: the Mayor of Iguala and his wife.

According to authorities, Mayor of Iguala, Jose Luis Abarca and his wife Maria de los Angeles Pineda are being heavily focused on in-relation to the disappearance of the 43 student-teachers because of having well-known connection to drug-traffickers. This shocking revelation isn’t all too shocking within Iguala because the connection between Abarca and drug-traffickers is a known secret due to Abarca’s wife, Pineda, having three brothers who are heavily involved with the drug world.

However, familial ties isn’t the only reason for Abarca being considered as a suspect. According to a city council member, the mayor of Iguala is allegedly a murderer as well.

According to Iguala City Councilwoman Sofia Mendoza the murderer of her was the mayor. Last year, Arturo Hernandez, a local community organizer in Iguala, was allegedly shot by the mayor a day after the two were publically arguing at a city council meeting. Known political rivals, the rivalry came to an end when a witness reported that she say the mayor shoot Hernandez in the head.

“This man had so much power, there was little I could do, I just had to take it,” repeated Councilwoman Mendoza, repeating the statement the witness gave authorities. “I couldn’t bear to look at him anymore.”

Since her husband’s death, Councilwoman Mendoza has lost her office within the city hall after the mayor took it away from her. She now holds meeting with constituents behind city hall sitting on a plastic table.

On September 30th, Mayor Abarca and his wife went before the city council of Iguala and requested a leave of absence from office. The mayor and his wife have not been seen since, and are believed to be connected to the disappearance of the students and a discovery that would be found in the suburbs of Iguala.

Rumors are starting to rise that the students are dead because of a discovery made last weekend. Within a suburb of Iguala, a six shallow graves were uncovered with 28 burnt, disfigured bodies found within. It is feared that some of the missing student-teachers are among the deceased. While the bodies have yet to be identified, the motive regarding the disappearance of the student-teachers is still unknown.

In-regards to why the student-teachers were taken, some are saying that police officers worked with members of the Guerreros Unidos in order to slay the student-teachers for causing a mass disruption with the demonstration and a show of disrespect. In-response to these rumors, the state government has stated they have arrested 22 officers and charged them with murder. However, protesters on Wednesday’s demonstration are doubtful.

“We blame the state for the forced disappearance of our fellow students,” said a student at Wednesday’s demonstration.

At the demonstration on Wednesday, protesters also demanded answers and a solution for the increase of corrupt politicians and the overburden of excessive violence that is sweeping across the country.

According to the Human Rights Watch’s 2014 World Report, it was revealed that a majority of human rights violations occur within Mexico. Many of the human rights violators within Mexico was discovered to be at the hands of law enforcement officials. The report is showing a crisis that is continuing to grow out-of-hand and could be further trouble for Mexico and the United States of America.

While corruption is rampant in Mexico, America can also be to blame for the increase of corrupted officials. Contributing billions of dollars in financial aid to the Mexican military with very little oversight in where the money was going and who was taking it has allowed for corrupted officials to use the support to garner their own platforms of power.

According to Amnesty International, “In August [2012], despite the failure of Mexican authorities to meet human rights conditions set by the US Congress as part of the Merida initiative, the US State Department recommended that Congress release the 15% of funds subject to the conditions,” the statement was made in relation to the lack of knowledge pertaining to the relationship of the partnership between America and Mexico.

Sadly, as I am writing this post four more mass graves were uncovered in the South of Iguala. Like the six graves found days ago, the new graves contained badly burnt bodies as well. It appears that what was once rumors, may be more than just that.

Federal Attorney General Jesus Murillo Kara has come out and declared that a formal search has been launched in trying to find Mayor Abarca and his wife.

Although he pledged to curb corruption and abuse by the military along with members of law enforcement working with gangs, Mexican President Enrique Peña Nieto has a long way to go when it comes to confronting the violence that is strangling the country. Let’s hope that does who are there to protect the people of Mexico have the same resilience, courage, strength to stand up against violence as the Mexican people who protest and demonstrate against said violence do.