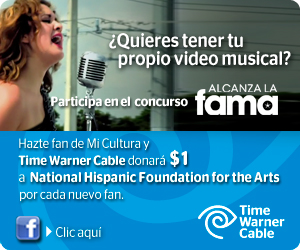 In celebration of Hispanic Heritage Month, Time Warner Cable, in partnership with the National Hispanic Foundation for the Arts, today announced the launch of “Alcanza La Fama” – a national talent contest that offers young artists the opportunity to showcase their singing skills for a chance to star on their own music video and be the face of an upcoming Time Warner Cable Spanish advertising campaign.

The “Alcanza La Fama” contest will be judged by a panel of judges including NHFA co-founders Jimmy Smits (NBC’s Outlaw) and Esai Morales (SyFy’s Caprica), who will select the winner of the singing contest (along with a public vote) by November 19, 2010. The contest will feature Karen Rodriguez, a twenty-one year old rising Latina artist from New York City, who TWC recognized for her enormous talent and produced her first professional record and music video. Through Ms. Rodriguez’s experience, TWC and NHFA are offering customers a unique opportunity to showcase their talents in a music video and compete for the chance to be featured in the next “Alcanza La Fama” commercial.

“We are excited about creating and supporting this initiative, which underscores Time Warner Cable’s commitment to serve the Hispanic community by giving them the control to stay connected to the people and entertainment they most passionate about in ways that are simple and easy,” said Marisol Martinez de Rodriguez, Senior Director of Hispanic Segment Marketing for Time Warner Cable. “Music is an integral part of our Latino culture so what better time than during Hispanic Heritage Month to empower Latinos to pursue their passion for music and achieve their dreams.”

To enter the contest, customers will need to submit a video-clip of the “Es Tu Manera” song via Time Warner Cable’s  Mi Cultura Facebook page (facebook.com/MiCultura) anytime between now and November 11. In addition, for every customer who “likes” the Mi Cultura Facebook page during the contest, Time Warner Cable will donate $1 to the National Hispanic Foundation for the Arts (NHFA), up to a maximum amount of $30,000.

“NHFA’s mission is to create opportunities for ‘la nueva ola’ of Latinos ready and waiting in the wings,” said Felix Sanchez, NHFA’s Chairman and Co-founder, “and this competition will use social media to provide unprecedented access to participants from every imaginable location in the country.”