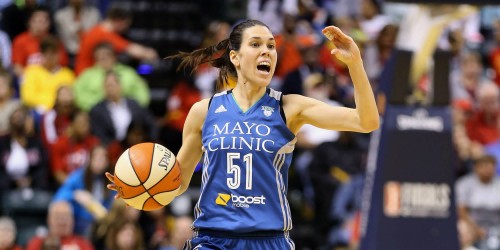 It’s been a different look for Anna Cruz this time around. In 2015, Cruz was acquired in a draft day trade by the Minnesota Lynx from the New York Liberty and was a key piece off the bench contributing to their championship a season ago.

Cruz, who spent most of her career overseas until joining New York in 2014, led her country, Spain to the Silver medal in the Rio Olympics losing only to the United States.

She was not on the roster to start 2016 but after her Olympic performance, the Lynx were fortunate that Cruz did not link up with anyone during that time. She helped in Minnesota’s late surge but as the minutes have become fewer, she remains ready. “I knew my role would be different this year and I came very late,” Cruz explained,

“I always go out with the same attitude, whether to play two or twenty minutes, I always try to help and contribute.”

As Minnesota star Maya Moore exploded again to tie the 2016 WNBA Finals at two games a piece, Anna Cruz used her seven minutes to mamimize the quality of her contribution. She would add a steal and two assists in the Lynx 81-77 win.

“We’ve been on the ropes and we have been able to respond,”

Now with a decisive fifth and final game this Thursday evening, Anna can look to the strong performances she displayed in last year’s Game 5 as proof that whatever she has to do, she will to gain that second ring. “We are looking forward to start the game,” Cruz said,

“We know it will not be easy but we will leave life to win.”

Will Cruz be the lucky charm again for Minnesota’s fourth title or will the Los Angeles Sparks Candace Parker finally win the big one? Tune in tonight.