Beyonce Pulled Off Stage By Fan In Sao Paulo

Beyonce Pulled Off Stage By Fan In Sao Paulo 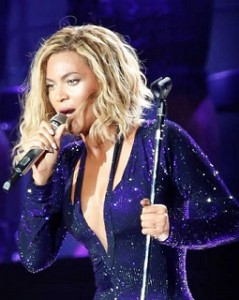 Beyonce was nearly pulled off stage Sunday by an overzealous fan while performing at the Morumbi Stadium in Sao Paulo, Brazil. The fan grabbed onto the 32-year-old singer and pulled her off stage during a performance of “Irreplaceable.”

Apparently the shirtless crazed fan jumped on stage, wrapped his arms around the former Destiny’s Child member and pulled her into the crowd. Security personnel helped Beyonce back up on stage and she finished the song as if nothing happened!

As security was throwing him out Bey allowed the man to see the rest of her performance and told security “It’s okay.” After the song the superstar greeted the fan who almost hurt her by asking his name and told him “Nice to meet you. Thank you, I love you, too.”

This isn’t the first incident that has occurred on the “Mrs. Carter Show” world tour. In Copenhagen in May, also while performing “Irreplaceable,” a fan reached out and smacked the singer on her backside.

The tour continues in Brazil on Tuesday then to Venezuela, Colombia and Mexico.