Excerpt: by Juan Guillen
I remember playing dominoes with my grand pops…and trying to catch him cheating “he would quickly flip a domino or two before picking them” (to see and reject good or bad dominoes. He would laugh a lot when he won, but when he lost, it was “silencio total” (total silence)… I loved every minute playing with him…cheating and all, and I miss those moments, now that he is gone. So, to those of you out there that have your grandparents alive, play with them now, talk to them now and give them love now, simply because, now is the time! They are with you, and you with them, cherish the moment. Kudos to RAIN and healthfirst for having this tournament!

By healthfirst
Last week Healthfirst and the Regional Aid For Interim Needs, Inc. (R.A.I.N.) organization held the first annual Domino Championship Tournament at the R.A.I.N. Gun Hill Senior Center in the Bronx. This event was offered as part of Healthfirst’s commitment to our member communities and to the health and well-being of senior citizens. 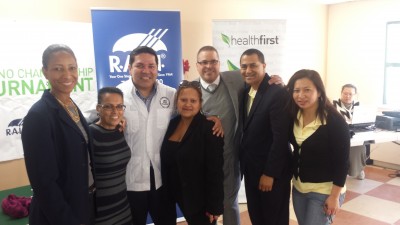 Ten participating R.A.I.N. Senior Centers sent teams of two players to compete for the grand prize and the championship title. The senior teams battled intensely from 9am until 1pm, when the team from the Eastchester Senior Center finally walked away with first place. Boston East Senior Center’s team took second place, and third place went to a duo from the Park Chester Senior Center. Special recognition goes out to Healthfirst’s Community Outreach, Marketing, and Sales teams, whose hard work was instrumental in organizing this great event for senior citizens.

Playing dominoes creates opportunities for interaction and competition and is a great activity to keep senior citizens engaged with other members of their respective communities. Playing dominoes can also open up opportunities to build relationships with new people and tends to be helpful with maintaining an active memory. Healthfirst is proud to have been a part of such a great opportunity for the senior community in the Bronx.