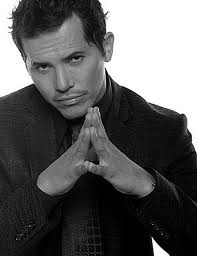 For those who didn’t know, “Ghetto Klown” star John Leguizamo was born to a Puerto Rican father and Colombian mother in Bogotá, Colombia and they immigrated to the US when John was a child. Now that this well-renowned actor/comedian is now in his 40s, father, Alberto, claims that he’s Colombian — making John 100% Colombian, with no Puerto Rican blood.

In the National Puerto Rican Day Parade yesterday, along Fifth Ave in NY, John was the Global Ambassador of the Arts at the parade.

The father originally went to El Diario, telling the reporter that he’s Colombian and showed proof that he was born there in 1936, John claims his father is from Aguadillo, PR. “Me duele que él (John) le mienta a los puertorriqueños y no respalde sus raíces colombianas” (translation: “It hurts me that [John] lies to the Puerto Ricans and doesn’t stand behind his Colombian roots,” according to the NY Daily News) he said.

Why come out with the secret (if true) now? Alberto thought his son, John, was over the whole “Boricua” thing — guess not!