Diddy is a Doctor???

Diddy is a Doctor???

Sean “Diddy” Combs, rapper, record producer, actor, entrepreneur and now a Doctor?? Many don’t know he is an alumni from Howard University, so why not earn a Doctorate and deliver the commencement address? Many students were not very happy he was even chosen.

Critics bring up the fact that the music producer and executive didn’t graduate as the central reason why he shouldn’t have the privilege of addressing the graduating class of 2014 this May – a feat done by the likes of Bill Clinton, Colin Powell and Oprah Winfrey. Sean ‘Diddy’ Combs has been very successful in achieving all his goals. Recently topped Forbes “Hip-Hop’s Wealthiest Artists” 2014 list with a net worth of $700 million. Why not the address the graduating class and the haters in between?? lol 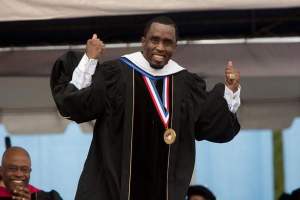